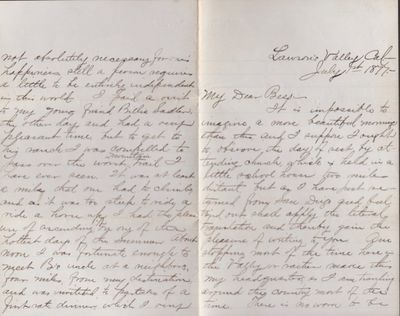 by [Frank]
Lawson's Valley, California, 1877. Letter. Very good. Manuscript Letter. 6 pages. Written on lined 8" x 5" sided paper. Folded twice. The paper has a small blind embossed stamp of "Golden Gate" in the upper left corner. This letter is addressed to "My Dear Bess" and signed "Ever Your Loving Frank." No envelope or last name of the writer or receiver provided. Frank has returned from San Diego to the Valley and has made this place is "headquarters as I am traveling around the country most of the time." He adds "There is no more to be done among the bees at present and it is far better for me to be moving around than to remain inactive. Very little money to be made here now as the prospect is that the majority of the crops will be a complete failure." Frank remarks, "It would be contrary to the laws of nature for such a dry country to yield bountifully." Frank tells Bess about future work, "Mr. Lawson has returned from Arizona and is well pleased with the Territory. He will try and remove there this fall, even though he has to sacrifice his little all to do so, and he is urgent to have me accompany him. He expects to engage in the cattle business on a small scale, and the venture certainly promises a living, if nothing more The mines, when properly developed, will make times easier than they ever can be here, and Mr. L. is confident that the climate will agree with me better than this." Another name mentioned in the letter is a visit made to his friend "Billie Sadler." The trail to Billie's house was very strenuous. Frank meet Billy's Uncle and a "Portuguese family" along the way. He remarks "The people of this country have (to) pretty hard, but what they have is always at the command of a friend It is one of the redeeming virtues of a Mexican. Am still trying to learn the language of the country and may be able to converse in it within a year or two." Frank signs off the letter by saying, "I know you will remember me my dear upon my birthday, and my thoughts, as usual will be with my dear girl. Give love to all." Although this letter has interesting content of the struggles to find good work there is little to no information found regarding the location of "Lawson's Valley, California. (Inventory #: 15771)
$80.00 add to cart or Buy Direct from Americana Books
Share this item