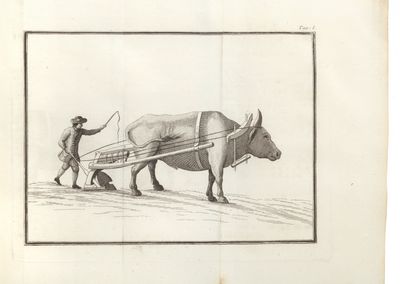 by HARASTI (originally HARASZTHY), Gaetano
Engraved vignette on title & three folding engraved plates. 252 pp. 8vo, cont. half-vellum & boards (boards slightly soiled, two very small wormholes to title touching three letters), spine gilt, green leather lettering piece on spine, uncut. Vicenza: nella Stamperia Turra, 1784. First edition of this uncommon book on wheat, corn, and other cereals. Harasti, a member of the Hungarian noble Haraszthy family of Buda, was a Franciscan friar who wrote many books on agriculture. He belonged to several scientific and agricultural societies in Italy, and this work was awarded a prize by the Accademia Agraria di Vicenza in 1783. In this work, Harasti provides a complete account of wheat, corn, and other cereals suitable for growing in Italy, methods of planting and cultivation, techniques to prevent diseases from affecting the crops, when and how to harvest, and methods of preventing the harvested grains from being contaminated by fungi and rodents while in storage. There are extensive discussions of the different species of the cereals and which are the most appropriate for different regions of Italy. The three folding plates depict plows. Very good copy with the bookplate of Sebastiano Canterzani (1734-1818), mathematician, physicist, and astronomer. ❧ B.IN.G. 1004. (Inventory #: 6457)
$1,650.00 add to cart or Buy Direct from
Jonathan A. Hill, Bookseller
Share this item
Jonathan A. Hill, Bookseller, Inc.
Offered by