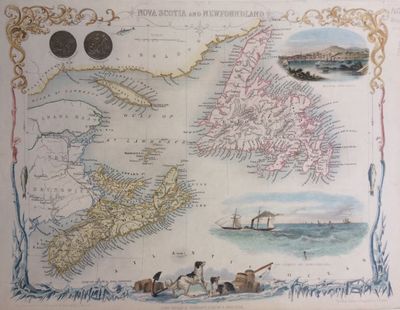 by TALLIS, John
London: J. Rapkin. unbound. Map. Steel engraving with modern hand coloring. Image measures 10.5" x 12.75". In good condition, with no center fold or crease as is common with this map. This map of Nova Scotia and Newfoundland offers both geographical and cultural overviews of this eastern region of Canada. The two islands, as well as Prince Edward Island, are shown as they are situated off the coasts of New Brunswick and Labrador. Each is abundantly labeled with the names of cities, counties, rivers, and most importantly, bays and harbors, as these sites were the keys to the economic prosperity with the 19th-century market. The decorative vignettes around the map further amplify these connection to commerce, as they include coins from the two locales, a view of the port at Halifax, Nova Scotia, and a cod fishery off Newfoundland. At the bottom, a pair of Newfoundland dogs surrounded by barrels complete a charmingly decorative border that begins with scrollwork near the title and progressively freezes into icy shards at the bottom. On either side, a fish on a line dangles from a tip of the scroll. John Tallis Jr. (1817-1876) was a London born bookseller who continued the prolific map publishing company started by his father. After a partnership with his brother, Tallis Jr. expanded the business to New York in 1849 as well as Boston, Cincinnati, Rochester, Philadelphia and Baltimore. He is remembered as one of the last decorative map makers, and this lovely map of British America exemplifies his work. (Inventory #: 288090)
$200.00 add to cart or Buy Direct from
Argosy Book Store
Share this item