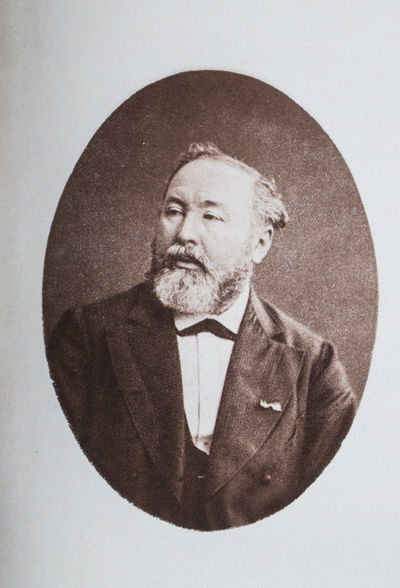 by Чериковер, И. М. (Cherikover, I.M); С.М. Гинзбурга (S.M. Ginzburg, preface and ed.)
St. Petersburg: Общества для распространения просвещен&#, 1913. First edition. Hardcover. vg. Quarto. (xiv) [1] 254pp. [3]. Original dark grey printed wrappers bound into modern brown buckram boards. Speckled edges of the book block. The book examines the history of the Obshchestva dlia Rasprostraneniia Prosveshcheniia Mezhdu Evreiami v Rossii (also known as "Society for the Spread of Enlightenment among the Jews of Russia"). This educational and civil association was first formed in 1863 in St. Petersburg, during a period of greater opportunities for Jews in Russia and the society promoted integration into wider Russian society. The organization was founded and funded by a number of wealthy Jewish philanthropists, including Joseph Günzburg (Osip Gavrilovch Gintsburg 1812-1878). The main goals of the organization included providing assistance to Jewish students at Russian universities, maintenance and aid to Jewish educational institutions for children, support to Jewish libraries, and the encouragement and promotion of Jewish authors, publications and the field of Jewish studies. Over the years of activity the OPE had struggles in a number of different respects including finances, anti-Semitism (including some debilitating legislation against Jews) and inter community issues, stemming from the increased interest of many of the of the most prominent members of the more secular Jewish intelligentsia to shed their Jewish cultural associations. The organization ultimately was forced to close its doors by the Bolshviks, in 1929, in their effort to eliminate all independent political and cultural institutions. Interleaved throughout the text are 8 plates of b/w photographic portraits, reproduced in sepia-toned collotyes, of the founding members of the organization, each with a protective waxpaper guard with printed captions. Contains scholarly footnotes throughout the text. The back of the book includes a 2-page appendix containing tables of membership and financial information for the society. Text in Russian. Binding with light bumping and rubbing to corners. Bumped along the bottom edges of the front cover. Interior with a half-inch hole near the bottom of the title page. Age toning to pages throughout. Rear free endpaper with extensive notes in pencil from the previous owner. Binding an interior in overall very good condition. Scarce. alternate title: "История О-ва распростр. просвещ. между евреями в России (Inventory #: 44108)
$450.00 add to cart or Buy Direct from
Eric Chaim Kline Bookseller
Share this item