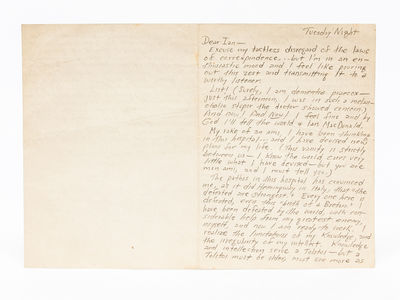 by Kerouac, Jack
[N.P.], 1943. Original Autograph Letter Signed and addressed to childhood friend Ian MacDonald. 3 pages handwritten in pencil on 1 sheet measuring 11.5 x 8 inches. In excellent condition overall, the letter has a vertical center fold line intact. Strong and legible, including his signature "Jack" on page 3. An exceptional letter from the 21 year old Kerouac to his friend Ian, regarding his plan to become a great writer and to have faith in his own creative powers.

Written during his 1943 hospital stay shortly before his Naval discharge for "dementia praecox," this letter captures Kerouac's youthful determination and optimism about beginning a literary career and developing a unique voice. From the letter's opening, Kerouac admits that while he had been very depressed earlier in the day, "I'm in an enthusiastic mood and I feel like pouring out this zest and transmitting it to a worthy listener...I have been thinking in this hospital---and I have devised new plans for my life." Already showing writerly signs of needing a reader to whom he can address his thoughts, Kerouac reflects on what a writer needs in order to create, and where he might fit among the literary greats. "The pathos in this hospital has convinced me, as it did Hemingway in Italy, that the 'defeated are the strongest,'" he writes to Ian. "I have been defeated by the world, with considerable help from my greatest enemy, myself, and now I am ready to work. I realize the limitations of my knowledge and the irregularity of my intellect. Knowledge and intellection serve a Tolstoi -- but a Tolstoi must be older, must see more as well -- and I am not going to be a Tolstoi. I will be a Kerouac, whatever that suggests. Knowledge comes with time. As far as creative powers go, I have them and I know it." Despite struggling and failing to adjust to the expectations of military life, Kerouac begins to conceive of how well his individuality might fit within a wider literary community. He also considers what skill he currently has and needs to have faith in, as well as those parts of himself that he should focus on developing through life experience. He writes, "I must change my life now, I have reached 21 and I am in dead earnest about all things. This does not mean I shall cease my debauchings; you see, Ian, debauchery is the release of man from whatever stringencies he's applied to himself." Sex, flirtation, and love, he argues, are all inspirations that shape the work of soldiers, veterans, writers, and academicians alike. As for himself, he says "I feel as well the time for my love to come along. Ian, I have been awaiting my Helen for a long time" before reflecting on Norma, with whom he had a brief flirtation, and his first love "a lovely Irish lass named, simply, Mary." Leaving a time of war and shifting into a new period of his life, Kerouac shares his excitement and urge to move ahead. And he shares this with a friend at a moment, friendless, in the hospital where he needs to exercise his voice. An exceptional letter revealing the development of the young man into "a Kerouac."