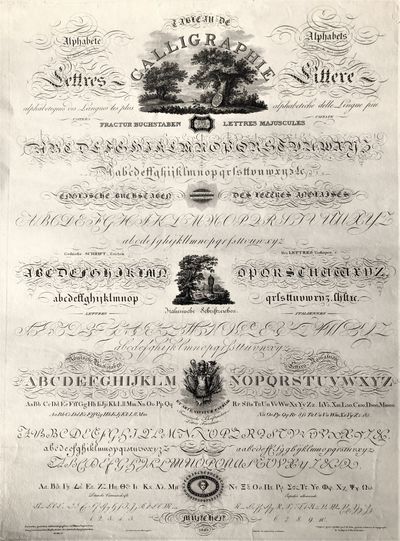 by SEITZ, Johann Baptist (1786-1859)
Munich: Anton Dreer, 1816. Large folio engraved broadsheet (775 x 590 mm.) of calligraphic samples, with five engraved vignettes. Thick wove paper, deckle edges. Fine condition.*** A splendid calligraphic sample, beautifully preserved. The imprint states that it was "composed, engraved and published by J. B. Seitz." Seitz was an engraver for the Royal Bavarian Bureau of Statistics and Topography (Königlichen Bayrischen Statistisch-Topographischen Bureau), which was responsible for the manufacture of official maps and plans. He was one of the first technicians to work on the trial production of lithographed maps. The present rare sample-sheet was presumably produced for cartographic institutes, publishers and mapmakers. The sub-title "Alphabets of Languages the most customary" is in German, English, French and Italian, and the remaining captions, all in different ornamented scripts, are in German and French. Included are ornate alphabets in Fraktur, several different italics (dubbed English, Italian and French Letter), gothic, roman, and Greek alphabets, and German Currentschrift. Three of the fine engraved vignettes, arrayed down the center of the sheet, are pictorial. At top is a romantic landscape in which a plaque leaning on a tree bears the (appropriate) motto "Nihil est Simul et Inventum et Perfectum." The others show a funerary monument in a pastoral glade, and a military trophy with the emblematic initials of Rome (SPQR) and motto below "Et arte vivitur patriae." I locate no other copies. On Seitz, cf. R. A. Winkler, Die Frühzeit der deutschen Lithographie (1975), 709. (Inventory #: 2965)
$3750.00 add to cart or Buy Direct from
Musinsky Rare Books
Share this item