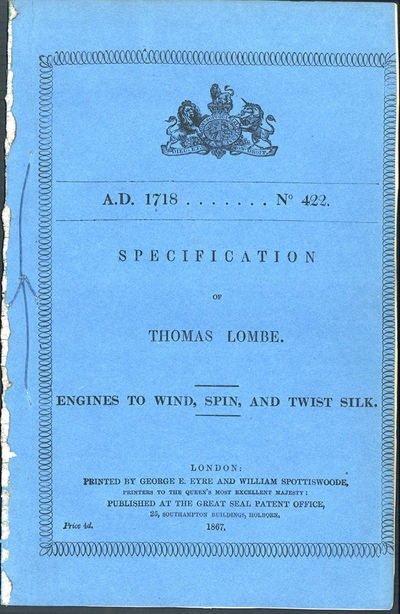 by Lombe, Thomas
London, 1867. Lombe, Thomas (1685-1739). A.D. 1718. No. 422. Specification of Thomas Lombe. Engines to wind, spin, and twist silk. 5pp. London: George E. Eyre and William Spottiswoode, 1867. 266 x 173 mm. Original printed wrappers, stitched. Fore-margin a bit trimmed, marginal tear on front wrapper, traces of glue from having been previously bound in a book, but very good. First Printing of the specification for Lombe's patent on his "New Invention of Three Sorts of Engines never before made or used in Great Britaine, One to Wind the Finest Raw Silk, Another to Spin, and the Other to Twist the Finest Italian Raw Silk into Organzine in great Perfection, which was never before done in this Kingdom" (p. 1). Lombe's machines, copied from Italian examples, were designed for "silk throwing," an industrial process in which silk is cleaned, spun and wound onto bobbins in preparation for weaving. Lombe obtained the patent on his machines in 1718, but the patent, like all English patents issued before October 1852, was not numbered or printed until the mid-nineteenth century. In 1719, the year after his patent was granted, Lombe and his brother John established Lombe's Mill in Derby, England's first successful silk throwing mill and the first successful powered continuous production unit in the world. Lombe's Mill provided the model for the factory concept later developed by Richard Arkwright and others. (Inventory #: 42709)
$750.00 add to cart or Buy Direct from
Jeremy Norman & Co.
Share this item
Jeremy Norman & Co., Inc.
Offered by