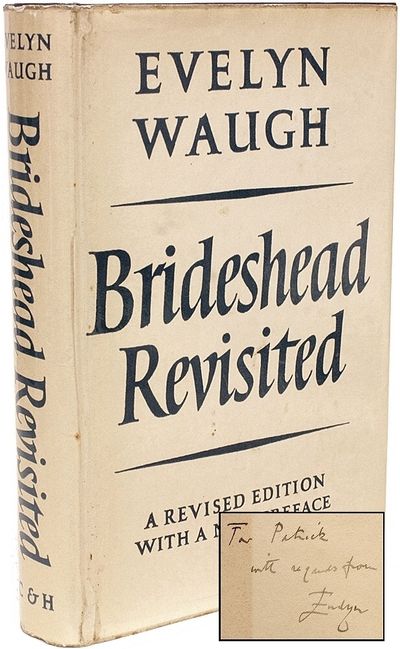 by WAUGH, Evelyn
London: Chapman & Hall, 1960, 1960. REVISED EDITION WITH A NEW PREFACE AND A PRESENTATION COPY. 1 vol., illustrated with plates after Waugh, inscribed on the front blank endleaf "For Patrick [Balfour] with regards from Evelyn", publisher's original gilt lettered blue cloth binding, with the DJ, not price clipped, minor foxing to endleaves otherwise NEAR FINE/VG. Provenance: Patrick Balfour, 3rd Baron Kinross (1904-1976). Evelyn and Patrick first met at Oxford in the early 1920s, and later in that decade were members of the social set known as The Bright Young Things, satirized in Waugh's novel Vile Bodies. In the book, Balfour serves as a model for Lord Balcairn the gossip columnist on the fictitious Daily Excess, whose column, written under the name Mr Chatterbox, is taken over by the central character, Adam Fenwick-Symes. In real life, Balfour, who was heir to the Barony of Kinross, wrote a gossip column for the Evening Standard, and was one of a number of aristocratic young men employed by mass circulation newspapers to recount the exploits of their friends and relations. Waugh often teasingly referred to Balfour as 'Mr Gossip'. (Inventory #: 000819)
$3,900.00 add to cart Available from D & D Galleries
Share this item
D & D Galleries
Offered by

Most books shipped within 24 hours or next business day. 5 day return policy.
More from this seller

The Knave of Hearts

NY: Charles Scribner's Sons, 1925 , 1925
(click for more details about The Knave of Hearts)
View all from this seller>