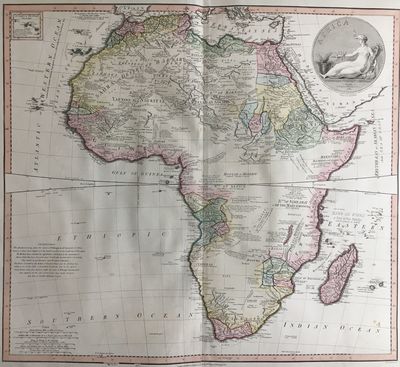 by FADEN, William & DELAROCHETTE, L. S.
London: William Faden, 1803. Map. Engraving with hand coloring. 23" x 30". This rare map of Africa by William Faden after De La Rochette from 1803 shows the entirety of the continent. Madagascar is included and a tiny inset map of the Azores upper left. An engraving with hand coloring, it outlines and highlights different regions, kingdoms, and territories. Much of the interior of the continent has tribal notations and there is an interruption in the projection at the equator, distinguishing the equator and the equinoctial line. The Nile arises from two side-by-side lakes (smaller than normally seen) north of the Equator. Red Sea is also labeled Gulf of Arabia. Explanatory notations throughout. Scorpion coin cartouche with a woman holding a cornucopia, and a scorpion, references the Emperor Hadrian who visited Africa during his reign. Good condition, some wear at original fold and small chips to margins. Louis Stanislas d'Arcy Delarochette (1731 - 1802) was a British cartographer and engraver based in late 18th century London. William Faden (1750-1836) was an 18th century English cartographer, engraver, mapseller, and publisher as well as 'Geographer to His Majesty & to his H.R.H. the Prince of Wales, George III & George IV. This is a beautiful example of their work. (Inventory #: 288473)
$1,000.00 add to cart or Buy Direct from
Argosy Book Store
Share this item