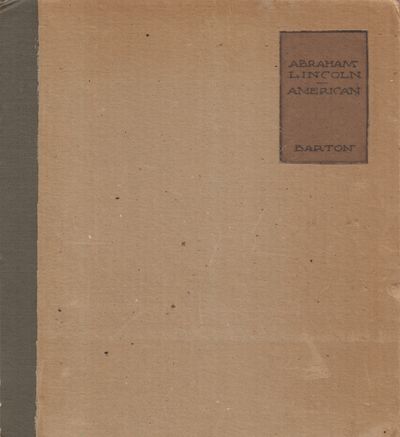 by Barton, William E.
Lime Rock, Conn.: Bernhardt Wall, Etcher of Books. Very Good. 1931. Hardcover. Buff boards with grey quarter cloth, title label on front board; [v], 5pp. Limited, "no. 11" and signed twice by Bernhardt Wall, etcher; limitation page states 100 copies were printed, Monaghan states that only 30 were printed. Numbered and signed in pencil on limitation page, and signed underneath the first etching of Lincoln. Ex-Libris of William R. and Lora C. Rathvon, with bookplate on front pastedown and inscription to them from Mrs. Margaret Kinkaid on a front endpaper. As noted in one of the first etchings, Wall requested Barton to write a piece on Abraham Lincoln for the creation of a small etched book. Wall created an etched dedication to Barton on one of the first pages. "Artist and historian, Bernhardt Wall (1872-1956) was a pioneer etcher and producer of fine press books who treated a vast array of subjects, including Texas and the Southwest" (Texas A&M). There are a total of 12 beautiful etchings in this book. The work of Wall is unique in that he not only drew the etchings for his books, but he also printed and bound them. As of December 2018 copies are found at Columbia, U of Delaware, U of Iowa, Chicago History Museum, Mississippi State, and Lincoln Memorial University Library. Monaghan 3246. ; Etchings; Large 8vo 9" - 10" tall; Signed by Illustrator . (Inventory #: 017499)
$750.00 add to cart Available from
Back of Beyond Books
Share this item