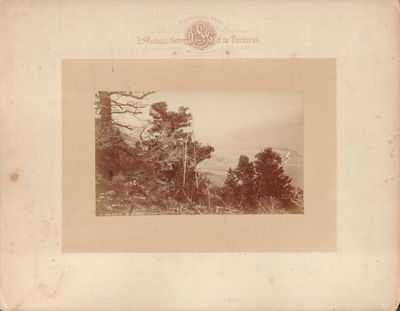 by Jackson, William Henry
Very Good. Photographic print taken by William Henry Jackson during the U. S. Geological and Geographical Survey of the Territories under F. V. Hayden between 1870 and 1878, in very good condition. Photo print measures 7 ¼" x 4 ¼" and is on original Department of Interior USGS mount which measures 14" x 11"; titled in the negative. Photo has light yellowing; mount has light toning and moderate soiling. The image depicts a view from the Blue River Mountains (now called the Gore Range) in Colorado, and the Blue River in the distance. In 1870 Professor Ferdinand V. Hayden invited Jackson to join the U. S. Geological and Geographical Survey of the Territories. For the next 8 years, Jackson took thousands of photographs and many stereograph images of the West, particularly in Utah, Wyoming, Montana, and Colorado (University of Chicago Library). Images taken by W. H. Jackson called attention to the West, depicting the beauty and history found there. . (Inventory #: 017778)
$650.00 add to cart Available from
Back of Beyond Books
Share this item

Gustave Baumann and Friends: Artist Cards from Holidays Past