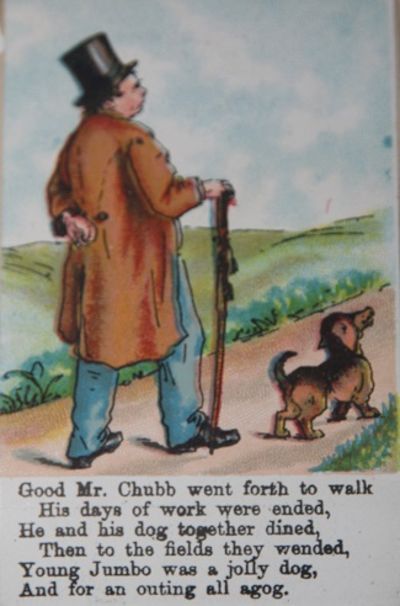 first edition NA
First Edition. NA. Very Good. N.p., no publisher given, N.d., circa 1890. Eight paneled leporello, each with a chromolithographic illustration, and six lines of rhymed verse telling the story of the mishievous dog who simply can't contain himself when he espies geese, a boy, cattle, etc. Only the sight of a whip at the end brings contrition, which we trust is ephemeral. The dog looks most like a dachshund, although the breed isn't specified, and one can't be sure that is what the artist intended. Closed, oblong, 7 by 12 cm. Opening to be 81 cm long. Scarce, with three copies found on OCLC First Search (Melbourne, Monash U., National Library of Scotland). No copies located in the U.S. Condition: hinge of cover unobtrusively strengthened with rice paper. Flattened edge creases, microscopic edge chip, and light edge soil to cover. (Inventory #: 006251)
$175.00 add to cart Available from
White Fox Rare Books & Antiques
Share this item
White Fox Rare Books and Antiques
Offered by