Of the lawes of ecclesiasticall politie, eight bookes 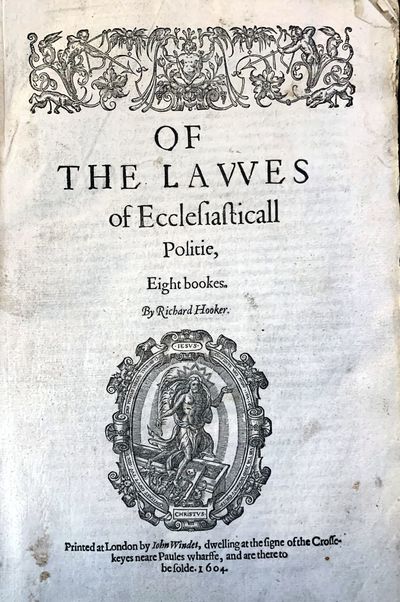 by HOOKER, Richard
London: John Windet, 1604. SECOND EDITION. Separate title page for the fifth book. Woodcut devices on titles, headpieces, and initials. Contemporary vellum, preserved in a folding cloth box. Ownership inscription of Edward Pye Chamberlayne dated 1692, 1693 and 1706, perhaps the same Chamberlayne (1661-1727) who spent time in Barbados and married Anne Kedley (1662-1733). They lived at "Nooke's Court," also known as the "new house" in the parish of Dewchurch, Herefordshire, England. There are numerous annotations in his hand on the fly-leaf, including a large manuscript "Edward and Anne." Additional annotations throughout the book. Rare second edition of first four books initially published in 1593; this copy was also issued with the first edition of the fifth book published in 1597 which was a common practice. The text was originally intended to be eight books but only five were completed in Hooker's lifetime. This book is considered Hooker's masterpiece. The text was initially conceived as a response to the publication of An admonition to Parliament issued from a secret press in 1572. Admonition called for Queen Elizabeth I to return to a "more pure" form of worship in the Church of England. Puritans soon took up Admonition as their platform. In his response, Hooker defends the Church of England against Puritanism and Roman Catholicism. The core of Hooker's thinking on the relations of church and state is unity. In his view, the Puritans adopted an impossible position: they claimed to be loyal to the queen while repudiating her church. By law and by reason, the people of England must be Anglican, pledged to serve Elizabeth as the supreme magistrate of the country and the supreme governor of the church. He criticized Roman Catholics for the dependence on tradition and argued that Puritans could not claim loyalty to the Queen while calling for reforms of her church. Ultimately, Hooker steadfastly upholds the tenants of Anglican tradition based on Bible, church, and reason, or in his words a "threefold cord not quickly broken." Hooker (1554-1600) was an Anglican priest, one of the most important and influential English theologians of the sixteenth century. His writings, especially the Lawes of ecclesiasticall politie, influenced both the development of the Church of England as well as political philosophy in his ethics and defense of human reason. (Inventory #: 17472)
$3500.00 add to cart or Buy Direct from
Rootenberg Rare Books
Share this item

A monograph of the Coraciidae, or family of the Rollers

Farnborough : by the author , 1893
(click for more details about A monograph of the Coraciidae, or family of the Rollers)

A catalogue of the lords, knights, and gentlemen that have compounded for their estates

London : Printed for Thomas Dring , 1655
(click for more details about A catalogue of the lords, knights, and gentlemen that have compounded for their estates)
View all from this seller>