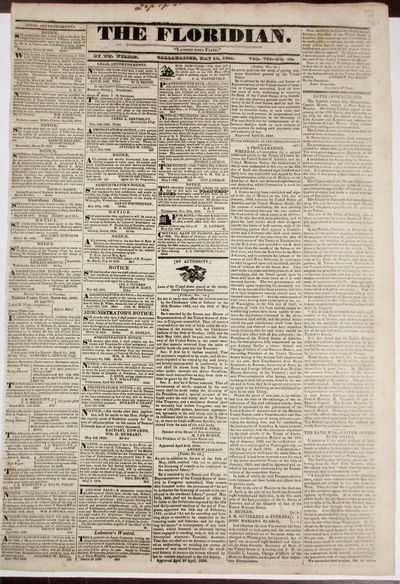 by [Florida]
Tallahassee: By Wm. Wilson, 1836. Folio, 13-1/4" x 19-1/2". [4] pp, each page printed in five columns, separated by rules. Repairs to second leaf, without taking any text. Else Very Good. Wilson established the second Tallahassee territorial press. "On October 7, 1828, William Wilson established the Floridian, most influential Florida paper of the succeeding half-century. Wilson managed to secure the contract for printing the documents of the seventh legislative council, which met in the fall of 1828, and published the Acts of that session with the imprint 'Printed by William Wilson. Tallahassee, 1829.' Wilson remained publisher of the Floridian until 1837 and retained the public printing contract until that time, with the exception of 1831." [McMurtrie, Beginnings of Printing in Florida, 23 FL Historical Quarterly 83 (1944)]. This is a significant issue from Wilson's press. It prints at length material on the Texas Army's 1836 victory at San Jacinto, the decisive battle of the Texas War of Independence (1836); news and ads from Tallahassee at the time of the Second Seminole Indian War (1835-1842); Andrew Jackson's 1836 Proclamation on the boundary between the United States and Mexico; the murder of "a white boy about fifteen years of age by a party of savages"; Governor Call's Address on the frontier "crisis" caused by "marauding bands" of Indians. One article reproduces excerpts from the official account of the storming of the Alamo, stating in part that the fort "had been attacked by a force consisting of 1400 men, divided into four columns and a reserve, at five o'clock in the morning - that the resistance of the Texians was of the most determined character, and continued for more than an hour and a half, when the garrison were, as far as can be learned slaughtered." (Inventory #: 35551)
$850.00 add to cart or Buy Direct from
David M. Lesser, Fine Antiquarian
Share this item
David M. Lesser, Fine Antiquarian Books LLC
Offered by

ADDRESSES DELIVERED AT THE INAUGURATION OF THE REV. JOHN GORDON, D.D., AS PRESIDENT OF HOWARD UNIVERSITY. WASHINGTON, DISTRICT OF COLUMBIA, WEDNESDAY, MARCH THE THIRTIETH, NINETEEN HUNDRED AND FOUR

Washington 1904
(click for more details about ADDRESSES DELIVERED AT THE INAUGURATION OF THE REV. JOHN GORDON, D.D., AS PRESIDENT OF HOWARD UNIVERSITY. WASHINGTON, DISTRICT OF COLUMBIA, WEDNESDAY, MARCH THE THIRTIETH, NINETEEN HUNDRED AND FOUR)
View all from this seller>