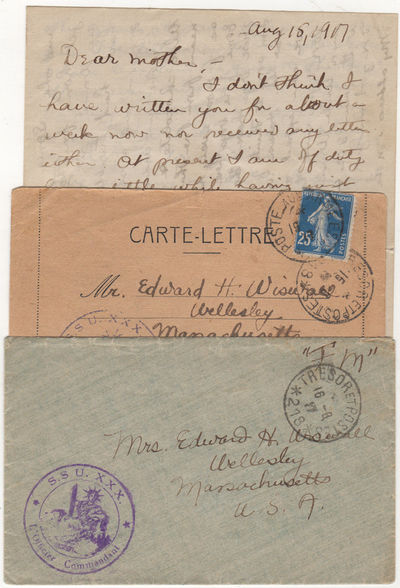 by Harold Wiswall
[Dugny, France], 1917. Unbound. Very good. Two letters sent on consecutive days by Wiswall to his family in Wellesley, Massachusetts. The first is to Urswall's brother and was written on a 5.25" x 7" soldier's mailing sheet. It is franked with a blue 25-centime Sower stamp (Scott #168) and bears a circular Tressors et Postes postmark dated 15 August 1917. A circulare S.S.U. XXX handstamps is also on the font. A return address on the reverse reads "H. C. Wiswall / S.S.U. 30 / convois automobiles / Par B.C.M / Paris, / France." The second letter, a longer letter to his mother, is in a plain envelope free-franked "F. M." (Franchise Militaire) has the same S.S.U handstamp, but it is postmarked on the 16th. Both are in nice shape. Transcripts included.

In these letters, Wiswall discusses his life in an American volunteer ambulance unit in the French army noting: "At present I am off duty . . . having just returned from a hurry call for 13 ambulances for victims of gas, 64 in all, some have lost eyes, etc. . . . There is a good deal going on here and it seems at times almost as if there were more Boche shells dropped around us than anywhere else. They put us to bed with their whistling and wake us up with their smash regular and lord but you should see some of the holes - I measured one over thirty feet across and half as deep. . . . . I tell you some of the big shells sure would be good for digging holes for cess pools. . . . One man was within 20 ft. and never got touched everything going over his head. . . . We see any number of planes and sonics up, last night there were 34 planes right around. The Boche go in squadrons and follow like flocks of ducks, although there are lots of single ones up also. . . . I just heard from Pre [and] it seems as if most everyone was drafted or is in service now. . . . Do you know mother, these boys haven't the faintest idea of what it is like and I'm sorry to think of them in conditions such as I've seen some here. However, war is war."Well before the United States entered the war, approximately 2,000 American volunteers were manning ambulance sections for the French Army. Collectively known as the American Field Service, men and ambulances were organized into 33 sanitary service units.

S.S.U. 30, which supported the French 2nd and 10th Armies, assembled in Paris before deploying to Dugny, near Verdun, in mid-July of 1917. During the time that these letters were written, it served the areas of Valdelaincourt, Chaumont, and Montharian. Before transferring to the American Expeditionary Force in the fall, it served at Rambluzin, Soissons, Vauxrot, Malmaison, and Saint-Remy.

Mail from U.S. volunteer ambulance drivers serving in the French army is decidedly scarce. (Inventory #: 009247)
$400.00 add to cart or Buy Direct from
Read'Em Again Books and Paper
Share this item