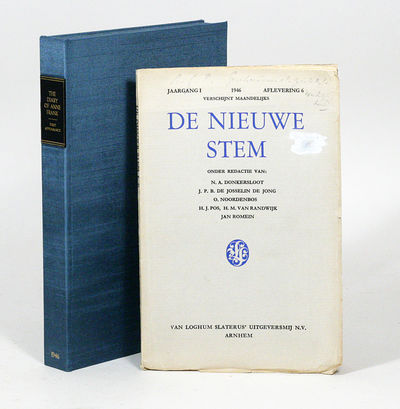 by FRANK, ANNE
Amsterdam: Van Loghum Slaterus, 1946. First edition. Original wrappers. Good. THE VERY RARE FIRST APPEARANCE OF ANY PART OF THE DIARY OF ANNE FRANK; PRECEDING THE BOOK EDITION. "The diary written by Anne Frank is probably the single most widely read book to come out of the Holocaust... Millions of readers have read the story of the teenage girl's two years in hiding. It has been translated into more than thirty-five languages and published in as many countries. Her diary was also the foundation for a successful drama performed worldwide (The Diary of Anne Frank, 1956) and a film of the same title (1959). Especially in the last twenty years, many schoolchildren and adults alike have had their first exposure to the effects of Adolf Hitler's war through Anne's writing. Anne's diary so captured the attention of the world that her name has become symbolic of the six million Jewish victims of the Shoah...

"To many, Anne Frank has become a symbol of the strength and optimism of the human spirit in the midst of tragedy. In July 1944 Anne wrote what was to become the most famous line of her diary and the one most often used to symbolize her spirit. 'In spite of everything, I still believe that people are really good at heart'... Anne's writing put a human face to the unfathomable statistics of the millions of individuals who suffered and died" (Sarita Cargas, Encyclopedia of Holocaust Literature).

On the publication in De Nieuwe Stem:

The Diary, although now recognized as such an important historical document, almost never found its way into print. Anne's father, Otto Frank, gained possession of the manuscript after the war. By April 1946, the diary already had been rejected by several publishers and Otto Frank was having doubts about continuing to pursue publication. It was at this time that "he gave one typed copy to a friend, who lent it to Jan Romein, a professor of modern history. Much to Otto Frank's surprise the professor devoted an article to it in a Dutch newspaper, Het Parool... Romein's article appeared on April 3, 1946, hailing the diary as an outstanding example of wartime documentation by a remarkably talented Jewish girl (whose name was not disclosed)... His friends now urged Otto Frank to have Anne's diary published as she herself had wished" (quoted in Jeffrey Shandler, From Diary to Book).

Jan Romein was so impressed by the diary that, as one of the editors of the new left-leaning journal De Nieuwe Stem, he was able to arrange for the publication of excerpts from the diary in the journal's sixth issue, appearing in June 1946. These five excerpts (to "Kitty") begin on July 11, 1942, and conclude on April 11, 1944 and "mark the first publication of Anne's writing" (ibid), preceding the book edition, ultimately published in 1947 with a preface by Jan Romein's wife, Anne Romein-Verschoor.