100 DOLLARS REWARD. RAN AWAY FROM THE SUBSCRIBER, ON THE 24TH INSTANT, LEN GLASCO . . 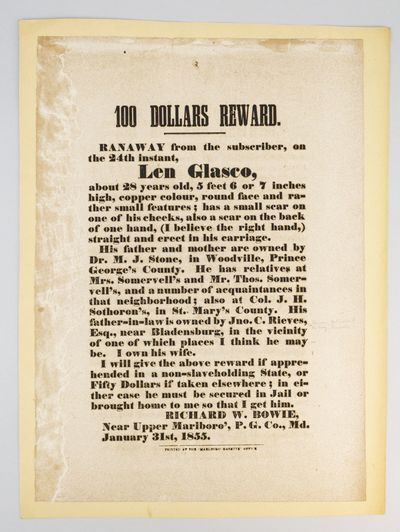 by (SLAVERY - RUNAWAY SLAVE BROADSIDE). BOWIE, RICHARD W.
Marlboro, Maryland: Printed by the "Marlboro Gazette" Office, 31 January 1855. 432 x 305 mm. (17 x 12"). Single sheet. Mounted on heavy stock. With short pencilled notation in one margin. Head and left edges with minor mounting stains, general light browning due to inexpensive paper stock, otherwise A VERY FINE SPECIMEN, quite clean and fresh. This is a fine example of an increasingly hard-to-find relic of a shameful part of U.S. history, a poster offering a reward for the return of a runaway slave. The present item is particularly notable for its physical description of the escaped slave, Len Glasco, whose skin is termed "copper-coloured," and for its information on the man's relatives, owned by other planters in the region. The sliding scale of the reward, offering twice as much for the man's return from a non-slaveholding state, gives us a glimpse into the divisions in the country over the issue of slavery. Maryland was a so-called border state, neither fish nor fowl in terms of political alignment with the Union or the Confederacy. Our broadside was printed in Prince George's County, Maryland, in the Tidewater region of the state where tobacco was grown on plantations like those in neighboring Virginia, and where ownership of slaves was common. In other parts of the state, by contrast, it was not unusual to find free black citizens. The broadside tells us that the aggrieved "subscriber," or slave owner, here, is Dr. Richard Bowie, a member of a prominent and powerful Maryland family that provided the state with two governors. Their holdings in Prince George's County were extensive, and their connections to other influential families impressive. The relatives of the missing slave are owned by various noteworthy families in the region: the Somervells mentioned in the broadside are Bowie's wife's relatives, and John C. Rives of Bladensburg, also mentioned, was the printer of the forerunner to the Congressional Record. When Dr. Bowie died in 1859, his estate was valued at $22,874, with the 24 slaves he owned at his death accounting for $18,550 of that amount. When those slaves were freed by an amendment to the Maryland state constitution in 1864 (the 1862 Emancipation Proclamation had exempted border states that stayed in the Union), the value of Bowie's estate plummeted to $3,477. Runaway slave broadsides were temporary and extremely ephemeral items, not likely to be kept and preserved by many people, making them hard to find today, and they are valued as critical evidence of a cruel and inhumane system. We do not know if Len Glasco made good his escape. The Underground Railroad had several routes through his part of Maryland, and perhaps he was aided by the efforts of another former Maryland slave, Harriet Tubman. (Inventory #: CRS1902)
$24,960.00 add to cart or Buy Direct from
Phillip J. Pirages Fine Books
Share this item