GUYS AND DOLLS (Writer/Director's Personal Copy of the Film Screenplay 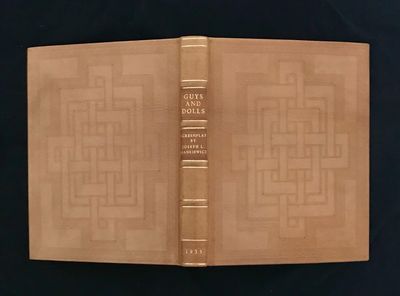 by Mankiewicz, Joseph (Damon Runyon)
Hollywood: MGM, 1955. Mankiewicz, Joseph (Writer and Director]. GUYS AND DOLLS. Hollywood, California: Samuel Goldwyn/MGM Studios, 1955). Mankiewicz's personally--owned custom-bound script. Mimeographed manuscript, 9 x 11.25 inches including binding, 131 pp, dated February 26, 1955, marked "Final" on title page, copy #43, square cut-out from title page as is often the case, indicating that the recipient has indeed received it, and blue revision pages dated 3/18/55 bound in. [WITH:] 60 inlaid silver gelatin 8 x 10 inch photos of scenes from the film. Script and photos bound in full stunning tan leather from the Dragonfly Bindery with "Guys and Dolls / Screenplay by Joseph L. Mankiewicz / 1955" embossed in gilt to spine. Lyrics to the musical numbers are also included within the text of the screenplay. Mankiewicz directed and wrote this screenplay adaptation based on the novel by Damon Runyon for the Oscar-winning film which sported a remarkable cast including Frank Sinatra, Marlon Brando, Jean Simmons, and Vivian Blaine. Condition of both interior content and exterior binding exceedingly Fine. Size: 4to - over 9¾" - 12" tall. First Edition. Decorative Boards. Fine/Fine. 4to - over 9¾" - 12" tall. Script. (Inventory #: 002605)
$11,000.00 add to cart Available from
Lakin & Marley Rare Books
Share this item
Lakin & Marley Rare Books
Offered by