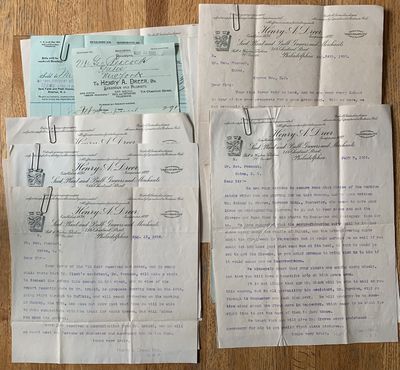 by Dreer, Henry A.
11 letters, 11 pp., (with retained mailing envelopes), typed with stamped signature, dated 17 February 1905 to 13 December 1906; with 2 receipts for May 1905 and April 1906; one letters is signed by "Geo. D. Clark," for the Henry A. Dreer company; all of the letters are written on the letterhead of "Henry A. Dreer, Seed, Plant and Bulb Growers and Merchants, Philadelphia."
Henry A. Dreer, Inc
Henry Augustus Dreer (1818-1873) was born in Philadelphia, Pennsylvania, on August 24, 1818. He was the son of a German immigrant cabinet maker and opened his seed and florist store, Henry A. Dreer, Inc., in 1838. Dreer saw the need for demonstration and experimental farms. From 1839-1850, his nursery was on the estate of William Hamilton, known as "The Woodlands" in present day West Philadelphia. His six small greenhouses were near today's 35th Street and Woodlawn Avenue for twenty-three years until 1873 when they were moved to three hundred acres at Riverton, New Jersey. He was a pioneer in introducing color printing to the trade in his bulb catalog for 1865. That catalog contained an illustration in six colors, printed from electros reproducing the original wood cuts. He wrote frequently for The Saturday Evening Post. He was a member of the Pennsylvania Horticultural Society and was treasurer from 1862-1873. He died in Philadelphia, December 22, 1873.
Dreer's son, William F. Dreer, entered the seed business at an early age. In 1868 and 1869, he was in Germany studying and working with seed producer Ernst Benary. Upon his father's death in December 1873, William took charge of the business. In 1892, he formed a corporation and permitted heads of departments to become stockholders. In 1924, he oversaw the company's move into an eight‑story building at 1306 Spring Garden St., Philadelphia.
The letters offered here, have an "ink stamped" signature of "Henry A. Dreer, Inc. G.D.C." Presumably, Dreer's son was running the business at the time these letters were written and G.D.C. was the initials of George D. Clark, a manager of the firm. The Dreer company writes to Peacock, who either runs a nursery/farm, at Gates, New York. Peacock is cultivating various types of Aster flower plants and seeds for Dreer, as well as other items. One letter is signed by a George D. Clark (1867-), a Scottish immigrant, working for Dreer, and listed in the 1900 Census as a "seed merchant." In 1920, Clark is found as "director" of the seed company.
The letters offer a look at the business of Henry A. Dreer, Inc. and one of their growers in New York State. The letters are business letters concerning Peacock suppling Dreer with various seeds and flowers, giving the names of the items, prices, weights, etc. There are also a couple of letters concerning a Rochester, New York photographer who is to go to Peacock's place to photograph some flowers for Dreer, presumably for his catalogues.
Sample Quotes:
"Feb 17, 1905
Mr. Geo. Peacock,
Gates, N.Y.

We find that we are running short on Snowdrift Aster. We are not quite sure as to whether you have any more of this stock of the crop of 1904, but understand that you have quite a little left of the crop of 1903, which seems to be of fair germination. In any case, we would like to have ½ lb. of seed, filled, of course, out of the 1904 crop if possible; if not, then out of the 1903. Please send it forward by mail on receipts, and oblige,
Yours very truly, Henry A. Dreer, Inc. G.D.C."

We are very anxious to secure some nice photos of the various Asters which you are growing for us this season, and we have written Mr. Nathan R. Graves, Hayward Bldg., Rochester, who seems to have good ideas on photographing flowers, to go out to your place and cut the flowers and take them to his studio in Rochester and photograph them for us. We have suggested that the early flowering sorts will be in good shape along about the middle of August, and the late flowering sorts about the first week in September; but it would perhaps be as well if you could let him know just when each was at its best, so that he could go out to get the flowers, or you could arrange to bring them in to him if it would cause you no inconvenience.

We sincerely trust that your plants are coming along nicely, and that you will have a bountiful crop of high-grade seed.

It is not likely that our Mr. Clark will be able to call on you this season, but in all probability his assistant Mr. parsons, will go through to Rochester and look them over. He will probably be up sometime along about the first days in September, which seems to be about the right time to get the most of them in good shape.

We trust that you will give Mr. Graves every assistance necessary for him to get really first-class pictures.
Yours very truly, Henry A. Dreer, Inc., G.D.C."

We duly received the package containing the 5 ¼ lbs. of White Fleece, 1 lb. Violet King and ½ lb. White Wonder Aster Seed. We noticed at the time it was received that it was not quite dry, and kept it in a good dry place, so as to get it in good shape before putting the seed up into packets. We find on weighing it up this morning that it has shrunk quite a little in weight, there being just a trifle under 5 lbs. of the White Fleece instead of 5 ¼ lbs. The Violet King is exactly 1 oz. short, and the White Wonder ½ oz. short. We are not quite sure as to whether this shortage is due to the drying out, or perhaps to defective scales which you may have. At all events, the above quantity is exactly what we have, and we are crediting your account with the amount received.

We trust that you will be able to make us a shipment of the Late Branching sorts before the close of the month.
Yours very truly, Henry A. Dreer, Inc. G.D.C."

We are duly in receipt of your favor of the 10th, together with the list of the exact amount of Astor Seed which you will send us. We have made a note of same, and will be glad to have the seed just as soon as you can ship it. Better let it come down by express over the Lehigh Valley R.R., this being the most direct route.

We note that you have a surplus of Shell Pink, but we believe that the 12 lbs. ordered will be sufficient for our requirements, and we do not care to carry over any more than is absolutely necessary.

You may also include with the shipment the pound of Wild Cucumber Seed Vine which you have.

Narrative of a Four Months’ Residence Among the Natives of a Valley of The Marquesas Islands; or, A Peep at Polynesian Life.

London : John Murray , 1846
(click for more details about Narrative of a Four Months’ Residence Among the Natives of a Valley of The Marquesas Islands; or, A Peep at Polynesian Life.)


(click for more details about Group of Mostly Incoming Letters to General Henry Goddard Thomas, Army Paymaster, while stationed in various Western Forts 1868-1889)
View all from this seller>