[Five Copies of a Typed Letter, Signed by Various Trade Unions Regarding Unemployment and the Impressment of Chain Gang Laborers]; Miles City, Mt 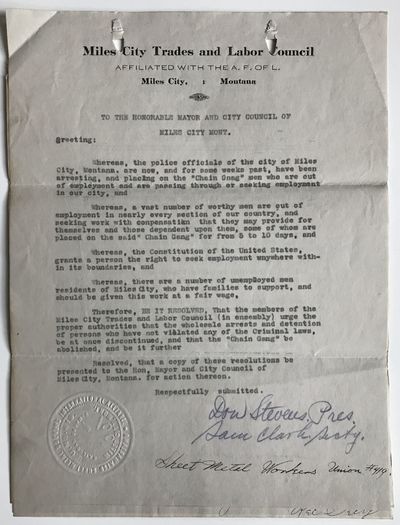 by [Montana]. [Labor Unions]
1914. Very good.. [5]pp. typescript, signed in manuscript. Minor wear and soiling. Five copies of a letter addressed to "the Honorable Mayor and City Council of Miles City Mont.", each signed by a different labor union and embossed with its seal, encouraging the abolishment of the chain gang and a cessation of impressed labor. The letter reads:

"Whereas, the police officials of the city of Miles City, Montana are now, and for some weeks past, have been arresting, and placing on the ‘Chain Gnag' [sic] men who are out of employment and are passing through or seeking employment in our city, and Whereas, a vast number of worthy men are out of employment in nearly every section of our country...some of whom are placed on the said ‘Chain Gang' for from 5 to 10 days, and Whereas the Constitution of the United States, grants a person the right to seek employment...Whereas there are a number of unemployed men residents of Miles City, who have families to support, and should be given this work at a fair wage, Therefore, BE IT RESOLVED, That the members of the Miles City Trades and Labor Council (in ensembly) urge the proper authorities that the wholesale arrests and detention of persons who have not violated any of the Criminal laws, be at once discontinued, and that the ‘Chain Gang' be abolished...."

Each copy is signed respectively by the Sheet Metal Workers Union #419, the International Brotherhood of Blacksmiths & Helpers #7, the Culinary Workers Union #524, the Trades and Labor Council of the city, and the Federal Labor Union of the city. Manuscript docketing provides a date of May 25, 1914. (Inventory #: 412)
$500.00 add to cart or Buy Direct from
McBride Rare Books
Share this item

Anhalt, Tx 1894
(click for more details about [Manuscript Volume of Popular and Traditional Songs Compiled by Emma S. Hofheinz, a Young German-American Woman in Central Texas])
View all from this seller>