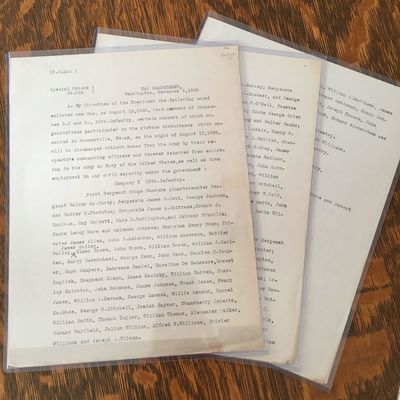 by [Texas]. [African-Americana]
[Brownsville, Tx.?], 1906. Very good.. [3]pp. Typescript, previously folded. Light tanning. A contemporary typescript of Army Special Orders No. 266, dated November 9, 1906, which dishonorably discharged 167 African-American soldiers from the 25th Infantry Regiment in the wake of the Brownsville Affair. Theodore Roosevelt ordered the men to be discharged in the wake a of murder at a saloon near their barracks at Fort Brown. The military unit had not been stationed there long before local anger over their presence resulted in the unit being blamed for an assault on a white woman and then a killing of a white bartender in August 1906. Evidence was fabricated to implicate twelve members of the regiment in the crimes, despite numerous attestations of the men's presence on the base at the time of the incident. When other enlisted men refused to name names in the face of local investigation by the Texas Rangers, Roosevelt ordered the discharge of the twelve under suspicion and over 150 others in the unit for a "conspiracy of silence." The present document puts the blame on three companies of the 25th regiment for "participation in the riotous disturbance," and individually names all those to be dishonorably discharged. An fascinating primary document of a shameful racial episode of the first Roosevelt's presidency that engendered resentment against the Republican Party in many African-American communities for years to come. (Inventory #: 346)
$675.00 add to cart Available from
McBride Rare Books
Share this item

Traffic Ordinance. Laws and Rules Regulating the Traffic on the Streets of the City of Vancouver, Wash

Vancouver : Vancouver Columbian Presses , 1912
(click for more details about Traffic Ordinance. Laws and Rules Regulating the Traffic on the Streets of the City of Vancouver, Wash)