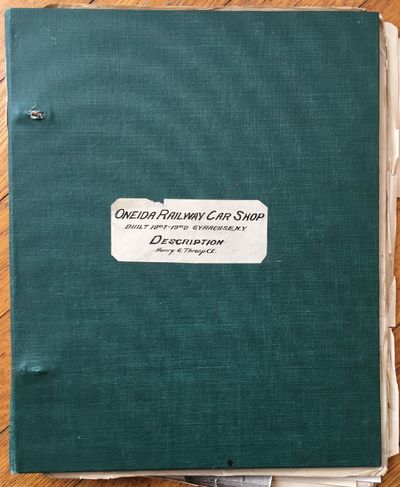 by Throop, Henry G.
Syracuse, 1910. Very good.. [24]pp. manuscript, 10pp. typescript, [19]pp. correspondence, plus a map, blueprint, five leaves of technical drawings, and thirteen original photographs. Together with two pamphlets on the subject. Folio. Original green binder, manuscript paper labels. Most items hole-punched into the binder, a few laid in. Wear at edges, two of the larger photographs split in half. Overall strong condition. Archive compiled by Henry G. Throop, the construction engineer in charge of the Syracuse Rapid Transit Company, which operated the Oneida Railway. The Oneida Railway was an electrified rail line which ran between Syracuse and Utica. Established in 1907, the line used a third rail pickup for power rather than the overhead electrification used in most street cars. It remained in business until 1930. Throop was a Cornell graduate (1905) who worked as a railroad engineer in New York for most of his career. The present archive details Throop's work on the construction of the rail shop for the Oneida Railway in Syracuse. The first segment is his manuscript narrative of the project, illustrated with original photographs and a map showing the location of the shop. It includes project details such as costs and methods, as well as several technical drawings. There is also a blueprint of the location. The typescript portion which follows is entitled "Specifications for Structural Steel Work for New Car Shops of the Oneida Railway Company, Wolf St., Syracuse, N.Y." Included are memoranda about costs and other details. The other component of the archive deals with emergency vehicles to service the line. Much of the correspondence deals with this subject, as do most of the photographs, which show a truck built on a Ford chassis with a tall ladder extending off the back of it. The photos show the ladder in various configurations, illustrating the vehicle's many uses. A wonderful archive documenting this piece of interurban transit at a transitional time for urban railways. (Inventory #: 372)
$650.00 add to cart Available from
McBride Rare Books
Share this item

Action of the Legislature of the State of Texas, in Reference to the Charge of Defalcation Against Commodore E.W. Moore, and the Construction Put Upon the "Annexation Resolutions," by the Government of the United States

Washington DC : T. Barnard , 1849
(click for more details about Action of the Legislature of the State of Texas, in Reference to the Charge of Defalcation Against Commodore E.W. Moore, and the Construction Put Upon the "Annexation Resolutions," by the Government of the United States)