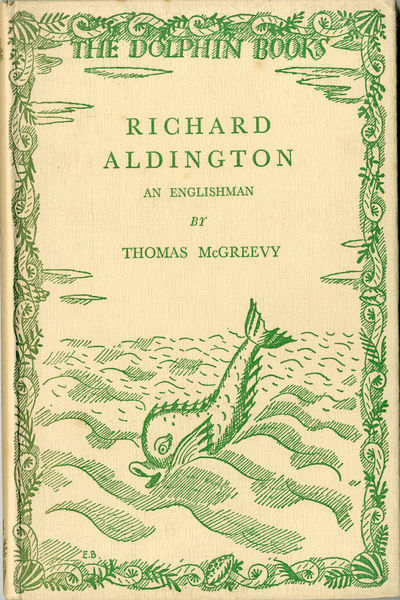 by [Aldington, Richard]: McGreevy, Thomas
London: Chatto & Windus, 1931. Pictorial boards. British bookseller's blind stamp on free endsheet, foxing at edges, otherwise a good copy, without dust jacket. First edition. Published as #10 of the Dolphin Books. McGreevy, then lecturer in English literature at l'Ecole Normal Supérieure and intimately involved in the defense of WORK IN PROGRESS, met Aldington at James Joyce's apartment in early June of 1928. It was a meeting that, according to Susan Schreibman's biographical sketch of McGreevy, "was to change the course of his life. Although only a year older, Aldington became MacGreevy's [sic] mentor. Aldington was instrumental in ... finding a publisher for his translation of Valéry's INTRODUCTION ... and in having two of his monographs on contemporary writers published..." (LOCAL IRELAND, online 1 July 1998). McGreevy then accompanied Aldington and Bridget Patmore on several excursions throughout Italy, France and Greece from 1928 through 1936. (Inventory #: WRCLIT81452)
$15.00 add to cart or Buy Direct from
William Reese Co. - Literature
Share this item

THE ATHANASIAN CREED TO BE RETAINED IN ITS INTEGRITY: AND WHY...

Oxford & London : James Parker and Co. , 1872
(click for more details about THE ATHANASIAN CREED TO BE RETAINED IN ITS INTEGRITY: AND WHY...)

New York : Published by William Durell and Co. , 1813
(click for more details about THE WORKS OF THE REV. JONATHAN SWIFT, D.D. DEAN OF ST. PATRICK'S, DUBLIN ... WITH NOTES, HISTORICAL AND CRITICAL ..)
View all from this seller>