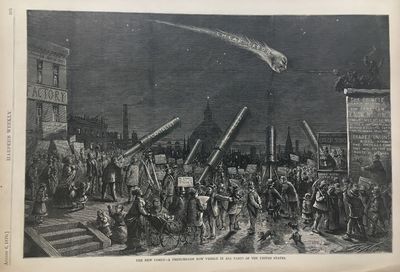 by NAST, Thomas; HARPER'S WEEKLY
New York: Harper's Weekly, 1870. unbound. Woodcut. 11 1/4" x 16". Shows some small chips at edges, image unaffected. In very good condition. A full page political cartoon showing a Chinese head as a comet labeled "cheap labor" being looked at by a number of people, some with telescopes labeled "capitalist," and "the press." This cartoon was sparked by an incident at the Model Shoe Factory of Calvin T. Sampson in Massachusetts where a labor strike and a large, strong labor union prevented the company from being able to hire anyone to replace those on strike. Ultimately, the owner brought Chinese laborers from San Francisco, effectively "busting" the union and setting a precedent for entrepreneurs in the East. Page 505 from the August 6, 1870 edition of Harper's Magazine. Chips to margins.Thomas Nast was a political cartoonist and illustrator; credited with devising elephant and donkey symbols of Republican and Democratic parties, and with creating American image of Santa Claus. He largely featured Catholicism and the papacy in Rome, Irish-Americans, and corrupt Democratic politicians (namely Boss Tweed and the Tammany Hall institution) in his work. (Inventory #: 288956)
$100.00 add to cart or Buy Direct from
Argosy Book Store
Share this item