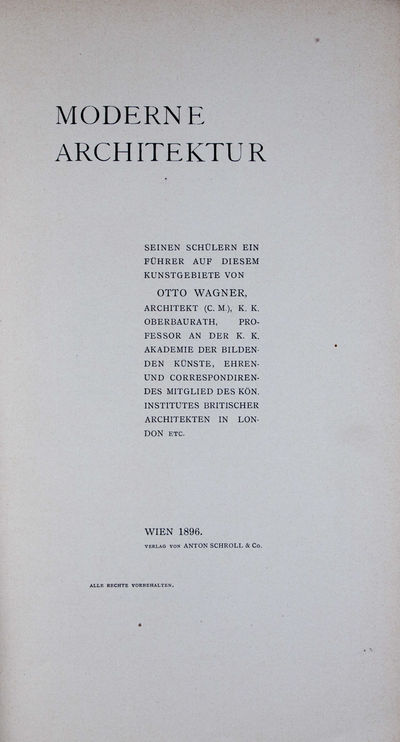 by Wagner, Otto
Wien: Anton Schroll & Co, 1896. First edition. Softcover. g+ to vg. Inscribed to Baron W. von Weckbecker by the author on title page. Quarto. 101 (1)pp. Original light green glossy wraps with black lettering on cover, protected by modern mylar. Gilt edges. Printed by Friedrich Jasper, Vienna. Scarce first edition of the third publication by Otto Wagner. In contrast to the second (1898) and third edition (1902) of this title, the first edition was published without illustrations (See Graf Otto Wagner page 81, 1994). A guide to architecture for his students. Wagner is considered to be a forerunner of modern architecture though he had to adhere to the prevailing taste of the time in his early career. Text in German. Light wear along edges of binding with lower right corner of cover creased and lightly rubbed. Four inch closed tear at head of spine, front joint. Slightly starting at inside front cover and some pencil markings and underlining in text. Binding in overall good+, interior in very good condition. Otto Koloman Wagner (1841-1918) studied architecture at the Viennese Polytechnic Institute and the Royal School of Architecture in Berlin. He returned to Vienna after his studies and became best known for his lasting impact on the architecture of Vienna. In 1894 he became Professor of Architecture at the Academy of Fine Arts Vienna and in 1897 he joined the Vienna Secession, an artist group including Gustav Klimt, Josef Hoffmann and Koloman Moser. One of Wagner's students was Rudolph Schindler. (Inventory #: 44918)
$3,000.00 add to cart or Buy Direct from
Eric Chaim Kline Bookseller
Share this item