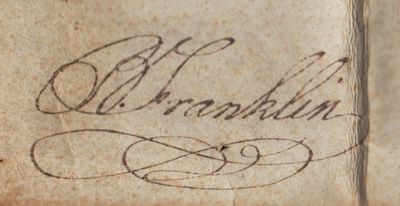 by Benjamin Franklin
April 5, 1787. Framed land grant to Lt. John Armstrong on vellum with affixed State of Pennsylvania seal: "The Supreme Executive Council of the Commonwealth of Pennsylvania. To all to whom these presents shall come GREETING: KNOW YE, That in consideration of the services rendered by John Armstrong Lieutenant in the late army of the United States there is granted by the said commonwealth unto the said John Armstrong a certain tract or parcel of land lying in the county of Westmoreland in the third district of the donation Lands [this was acreage promised to Revolutionary War veterans who had promised to serve until the end of the war] Beginning at a maple tree the numbered Corner and running East by Lot N 623 Two hundred and twelve Perches to a maple, thence South by lot N 617. One hundred and sixty perches to a Maple, thence West by lot N 625. Two hundred and twelve perches to a White oak thence North by Lot N 643. One hundred and thirty perches to the place of Beginning Two hundred Acres and allowance of six perchent for roading and...DCXXIV. TO HAVE AND TO HOLD the said tract or parcel of land, with the appurtenances, unto the said John Armstrong his heirs and assigns forever, to the only proper use and behalf of the said John Armstrong his Heirs and assigns forever free and clear of all restrictions and reservations as to mines, royalties, quit-rents, or otherwise, excepting and reserving only the fifth part of all gold and silver ore for the use of this commonwealth, to be delivered at the pit's mouth clear of all charges. IN WITNESS whereof His Excellency Benjamin Franklin Esquire, President of the Supreme Executive Council, hath hereunto set his hand, and caused the state seal to be affixed the fifth day of April in the year of our Lord one thousand seven hundred and eighty seven and the commonwealth the Eleventh. ATTEST James Trimble for John Armstrong..." Recently framed in filleted gilt frame with museum non-glare UV block conservation glass ; Autograph; 24 x 21.75 in; Signed by Author; All shipments through USPS insured Priority Mail. (Inventory #: 4238)
$26,000.00 add to cart or Buy Direct from
William Chrisant & Sons
Share this item

30 day return guarantee, with full refund including shipping costs for up to 10 days after delivery if an item arrives misdescribed.
More from this seller

1932
(click for more details about Kaonohi, Hawaii Etching)
View all from this seller>