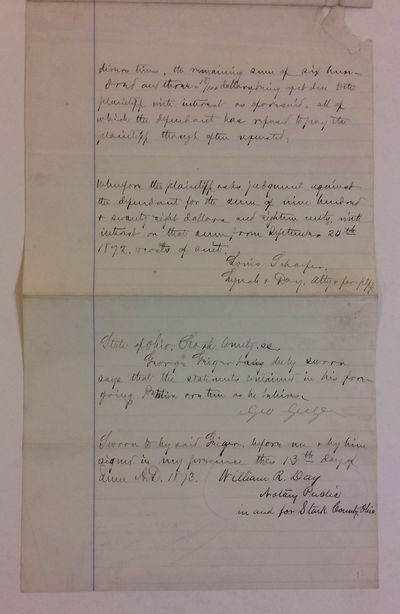 by DAY, William R. (1849-1923)
Stark County, OH, 1872. unbound. very good. Autograph manuscript signed: "William R. Day", folio, 3 pages, as Notary Public, a complete legal brief in his hand filed in Stark County, Ohio, September 20, 1872, concerning a dispute between George Gieger (plaintiff) and George K. Foye (defendant), over funds misappropriated during and after the contracting for the building of a house in Stark County. Fine condition. *Day would go on to serve nineteen years on the United States Supreme Court after his nomination by President Theodore Roosevelt in 1903. American statesman who served as United States Secretary of State under President McKinley and later, as Associate Justice of the United States Supreme Court. (Inventory #: 288966)
$300.00 add to cart or Buy Direct from
Argosy Book Store
Share this item