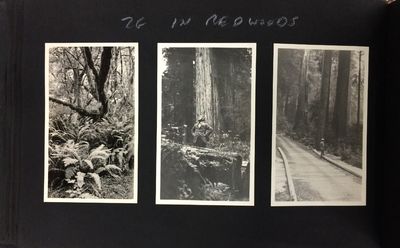 by Grey, Zane
Very Good. From the estate of Zane Grey, photo album depicting images of fishing in British Columbia, hunting in Arizona, and exploring the coast and redwoods of California. 1920s. Leather bound photo album with 372 b&w photographs mounted on recto and verso of black album leaves; most photographs measure 3 1/4" x 4 1/4"; labeled "San Clemente, Tonto, Girls" on front cover in white ink. Overall very good. Album covers have light wear and soiling; three leaves have minor dampstaining affecting content; photographs are in fine condition, except for a few on the leaves with dampstaining. The content of this album depicts striking and candid images. Photographs from southern California depict Zane Grey and women (labeled Dorothy Anderson or Claire) having fun on a beach, and "blackfish/pilot whales" jumping; British Columbia photos depict Zane Grey and a party of men and women fly fishing, along with logging and landscape scenes; Tonto basin images depict a hunting party with their kills, Zane Grey playing with two tamed bear cubs, hunting camps and landscape scenes. There are numerous images of Zane Grey. Other persons identified include his brother R. C. "Reddy" Grey, his daughter Betty Zane Grey, Anderson Lee "Babe" Haught (Grey's hunting guide in Arizona throughout the 1920s) , and George Takahashi (Grey's cook who traveled with him to Rim Country, cooking and processing meat for the hunting party). . (Inventory #: 018216)
$4,250.00 add to cart Available from
Back of Beyond Books
Share this item