1882 signed, manuscript letter written on the the United States House of Representatives Letterhead regarding running for office 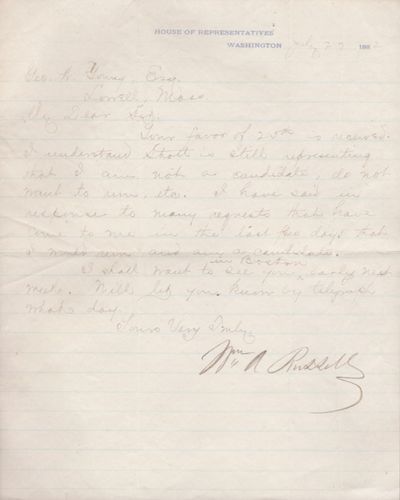 by [William A. Russell]
Washington DC, 1882. Very good. Letter. Approx. 10" x 8.5", Folded. Hand written letter is dated July 27, 1882 and is addressed to "Geo W. Young, Esq. Lowell, Mass. Russell writes, "My Dear Sir: Your favor of the 25th is received. I understand Shott is still representing that I am not a candidate, do not want to run, etc. I have said in response to many requests that have come to me in the last few days that I would run and are a candidate. I shall want to see you in Boston early next week. Will let you know by telegraph what day. Yours Very Truly Wm. A Russell." From wikipedia:

Russell was born in Wells River, Vermont. He pursued an academic course in Franklin, New Hampshire, Russell engaged in the manufacture of paper in Exeter, New Hampshire in 1852. He moved to Lawrence, Massachusetts in 1852, where he continued in that business. He served as a member of the Massachusetts House of Representatives in 1869.

He was a delegate to the Republican National Conventions in 1868 and 1876, and was elected as a Republican to the Forty-sixth, Forty-seventh, and Forty-eighth Congresses (March 4, 1879 - March 3, 1885). After finishing his time in office, he redevoted his time to the manufacture of paper. Russell donated his Prospect Hill estate in Lawrence to create the current grounds of Lawrence General Hospital. Russell died in Boston. (Inventory #: 16145)
$75.00 add to cart or Buy Direct from Americana Books
Share this item

Appendix D of the Report of the Adjutant General of the State of Maine, For the Years Ending 1864 and 1865

Augusta : Stevens & Sayward , 1866
(click for more details about Appendix D of the Report of the Adjutant General of the State of Maine, For the Years Ending 1864 and 1865)

by Lawrence, Edward A. D.D.

Hartford : Hamersley & Co , 1871
(click for more details about The Life of Rev. Joel Hawes, D.D. Tenth Pastor of the First Church, Hartford, Conn)
View all from this seller>