Private papers of James Boswell from Malahide Castle. In the collection of Lt.-Colonel Ralph Heyward Isham. Prepared for the press by Geoffrey Scott and now first printed 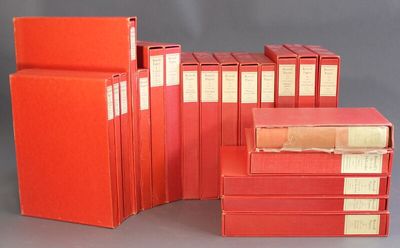 by Boswell, James
[Mount Vernon, New York: William Edwin Rudge, 1934. Edition limited to 570 copies designed by Bruce Rogers (this 290), complete set in 18 volumes, plus the separately published, but uniformly bound Boswell's tour of the Hebrides,1936 by the Viking Press, and Oxford University Press's Index (limited to 1250 copies); 20 volumes in all; folio, quarto, and octavo, extensively illustrated throughout with facsimiles of the manuscripts; a fine, bright, unopened set in original red cloth-backed red paper-covered boards, printed paper labels on spines, publisher's slipcases also with printed paper labels; index volume with original but tattered glassine cover, small splits to that volume's slipcase. The Work of Bruce Rogers, 370; Stark, Books Designed by Bruce Rogers, p. 10; Rogers, Paragraphs on Printing, p. 72: "If the style of typographic treatment was ever unmistakably indicated by the content, it was in this instance. Boswell and Baskerville were contemporaries, and had these papers been published during Boswell's lifetime, they might well have appeared in something like their present form, though perhaps not so luxuriously printed. The modern Baskerville type seemed by all odds the logical one to use." Laid in are: the prospectus in original red wrappers with paper label on upper cover; announcement of Scott's passing and Pottle's taking up the mantel in original red wrappers with gilt title on upper wrapper; two letters to the writer and critic Harry Hansen from J. B. Orrick and Frederick Pottle along with Hansen's typescript review of the second wave of papers discovered at Malahide; a signed typescript letter from Isham to accompany the announcement of Pottle's entry into the project; and an order form. (Inventory #: 53385)
$5,175.00 add to cart or Buy Direct from
Rulon-Miller Books
Share this item