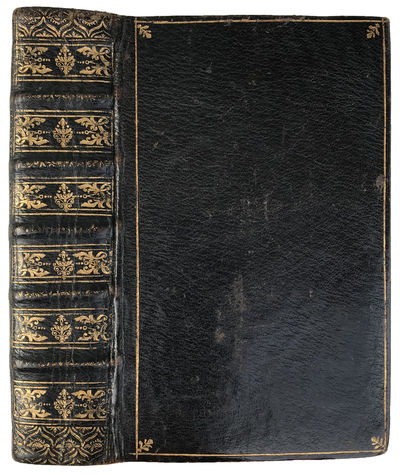 by GELASIUS DE CILIA [Gelasio di Cilia] (1654-1721).
Ratisbonae:: Radlmayr, 1756., 1756. Eighth edition. Small 8vo. 774, [10] pp. Head and tail pieces. Handsomely bound in full black morocco, gilt rule surround, corner fillets, raised bands, gilt spine compartments, all edges gilt. Ownership signature of the Ecclesio Parochialis in Wolterdingen [Germany], 1757. Lovely copy. A "CURIOUS TREASURY OF BENEDICTIONS, EXORCISMS, CHARMS, &C.": Contains a widely ranging series of benedictions and rites: "Gelasius de Cilia, in the curious Treasury of benedictions, exorcisms, charms, &c., gives several in which the titulus in introduced; for instance in the exorcism of the charta, or written charm, efficacious against demons and spectres, which commenced with a cross placed, like the little crucifix on the cross found at Clare. . . In the Benediction against Tempests we find the sentence - 'Jesus Nazarenus Rex Judeorum, - Titulus triumphalis benedicat et custodiat nos ab omnibus malis;' and in the solemn Exorcism of persons bewitched ('contra omnia malefica') the demon was adjured 'per triumphalem titulum,' which is directed to be written on the forehead of the sufferer." - p. 67. "Gold pectoral cross found at Clare Castle, Suffolk." The Archaeological Journal: Published Under the Direction of the . . . , Volume 25. London, 1868.

Regarding exorcisms, Clement XI objected to some in current use: "Some of the formulas, in fact, were coarsely vituperative in the highest degree. The demons were addressed as infernal beasts, vile filth of hell, stinking dung and other contemptuous epithets, and were threatened that their meat and drink should be fire, hail, snow, ice, sulphur, pitch, absinth, rosin, lead, the venom of serpents, etc." - Henry Charles Lea, Chapters from the Religious History of Spain Connected with the Inquisition, Philadelphia: Lea, 1890, p. 425. (Inventory #: LLV2634)
$750.00 add to cart Available from
Jeff Weber Rare Books
Share this item