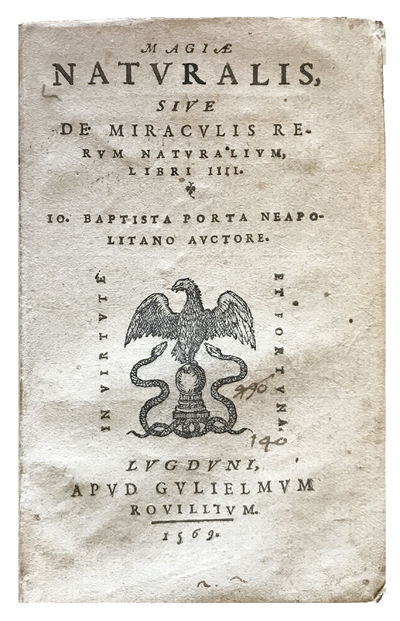 by PORTA, Giambattista della (ca. 1535-1615).
Lugduni [Lyon]:: Apud Gulielmum Rovillium, 1569., 1569. Small 8vo. [1]-344 pp., [4] ff. Index; marginal worm trails showing on the final 4 leaves. Somewhat modern quarter calf, and endleaves. Very good. RARE. Very early edition [Another edition of 1561 printed in Lyon by Roullius [283 pages], making this 1569 issue the second printed in Lyons, as determined via WorldCat.]. Porta's work was first issued in four books, 1558, and expanded up to XX books (1589), written first at the age of fifteen. Dedicated to Philip II of Spain. "From 1574 to 1580 Della Porta was repeatedly interrogated by inquisitors, and the publication of his writings was prohibited. Jean Bodin, in his Demonomanie des sorciers (1580), accuses Della Porta of being a 'poisonous sorcerer' and goes on to attack Agrippa. Among the various followers of Paracelsus, Jacques Gohory, denounced Della Porta. As Massimo L. Bianchi has recently demonstrated, Della Porta was up to date on Paracelsus' ideas, although perhaps only through his followers. As if this were not enough, Thomas Erastus, a Protestant critic of Paracelsism, spoke out against Della Porta as well - which leads one to believe that the last two accusations were also reactions against his chemical experiments. This onslaught forced Della Porta, at the height of his fame, to cease published for several years." - Zambelli, p. 28.

"Porta's first book, published in 1558 as Magiae naturalis, was a treatise on the secrets of nature, which he began collecting when he was fifteen. The secrets are arranged in four books, and the conception implied in the title is that natural magic is the perfection of natural philosophy and the highest science. This small collection of secrets constituted the basis of a twenty-book edition of the Magiae naturalis published in 1589, which is Porta's best known work and the basis of his reputation. It is an extraordinary hodgepodge of material representing that unique combination of curiosity and credulity common in the late Renaissance. But combined with the author's insatiable desire for the marvelous and apparently miraculous is a serious attempt to define and describe natural magic and some refined application of both mathematical and experimental techniques in science." - DSB, XI, pp. 96.

Giambattista della Porta, noted Neapolitan mathematician and natural philosopher, overshadowed only by Galileo in the work of Renaissance science, had a wide range of scientific and literary interests. There are demonstrated by his numerous published works. His most famous and best remembered are those on natural magic, optics, refraction and the telescope. He was also a member of the outstanding literary academy of Naples, Altomare, and the founder of the Accademia de' Secreti (Secrets of Nature). Later, he became a member of the famous Accademia dei Lincei, as well as other lesser known literary academies in Naples. His dabbling in pseudo-scientific and occult sciences caused his works to be banned by the Inquisition in 1592, which was lifted in 1598. Thorndike points out that Della Porta was either adept at escaping "serious molestation or punishment by submission or by influence in high places." - Thorndike, v.6, p. 156.