Founding Fighters: The Battlefield Leaders Who Made American Independence 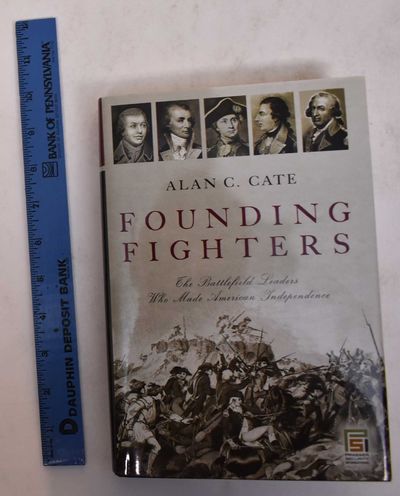 by Cate, Alan C.
Westport: Praeger Security International, 2006. Hardcover. VG/VG. Black boards with silver spine lettering. Illustrated dust jacket with black and burgundy lettering. xiv, 249 pp. American independence was won not just with ideas and words, but also through force of arms. A key element of that battlefield victory was the combat leadership provided by a fierce list of hard-fighting warriors at the regimental, brigade, and division echelons or their naval equivalents. Founding Fighters recounts the stories of fifteen of the American Revolution's most important and colorful battlefield commanders. Collectively, these men participated in virtually all of the war's significant battles and campaigns. They experienced the conflict in all its variants: conventional contest between opposing armies, brutal guerilla struggle between partisans and regulars, frontier and naval fighting, and civil war pitting neighbors, and even family members against each other. These founding fighters helped win stunning victories, knew ignominious defeats, and suffered physical and spiritual privation through times when ultimate victory and independence appeared impossibly remote. -Jacket. (Inventory #: 169892)
$38.00 add to cart or Buy Direct from Mullen Books
Share this item