Revolution of Hope: The Life, Faith, and Dreams of a Mexican President 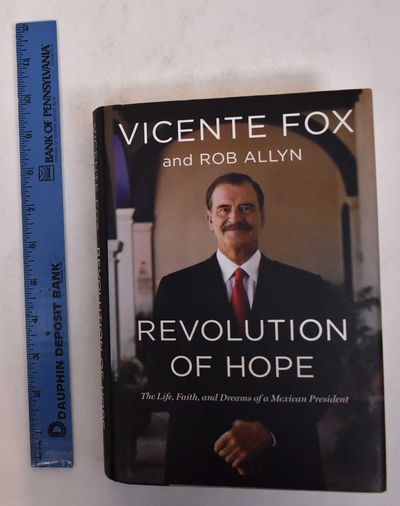 by Fox, Vincente and Rob Allyn
New York: Viking, 2007. Hardcover. VG/VG, signed on title page by Fox.. Tan boards with black spine and gilt spine lettering. Color-photographic dust jacket with white lettering. xx, 375 pp. 16 unnumbered pages of BW and color illustrations. The charismatic former President of Mexico offers a candid perspective on the state of world affairs. When Vicente Fox swept into office in 2000, he broke the dictatorial one-party rule that had strangled Mexico for over seventy years. Fox worked his way from ranch hand and truck driver to the youngest CEO in the history of Coca-Cola. As president, he steered Mexico's fragile young democracy through turbulent times, ushering in six years of economic stability and reform in health care, education, and housing, with increased freedom of the press. This book interweaves his inspiring personal story with his bold ideas for the future of the planet. Fox speaks forcefully on hot global topics like immigration, the war in Iraq, racism, globalization, the role of the United Nations, free trade, religion, gender equity, indigenous rights and the moral imperative to heal the global divide between rich and poor nations.--From publisher description. Signed by Fox! (Inventory #: 169894)
$125.00 add to cart or Buy Direct from Mullen Books
Share this item