So Many Brave Men: A History of the Battle at Minisink Ford 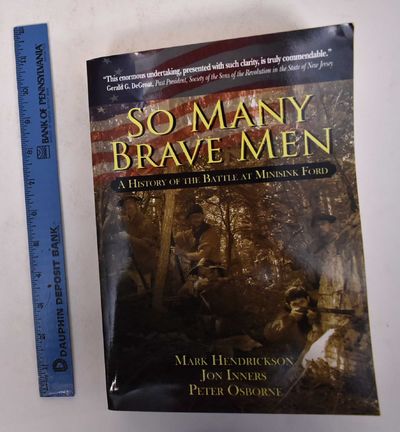 by Hendrickson, Mark, Jon Inners, and Peter Osborne
Easton, PA: Pienpack Publishing, 2010. Paperback. VG- moderate bowing to book, light wear to edges and corners.. Glossy illustrated wraps with yellow, black, and white lettering. 826 pp. Illustrations, maps. Signed by all three co-authors! "On July 22, 1779, one of the most lethal battles of the American Revolution, in terms of the ratio of participants to numbers killed, took place on a hill above Minisink Ford along the Delaware River north of Port Jervis, New York. The Battle at Minisink Ford, New York was a disaster for the American militia units. More than one third of the militiamen perished. This important work reveals primary sources about the battle that have not been seen in more than one hundred and fifty years. So Many Brave Men, the first major work written on the battle in thirty years, will encourage new interest in the battle, and the men who fought there. Many of the veterans of that catastrophe speak to us about that fateful day from the distance of more than 230 years. They also speak of their dedication to the cause of freedom and liberty." -Jacket. (Inventory #: 169937)
$40.00 add to cart or Buy Direct from Mullen Books
Share this item