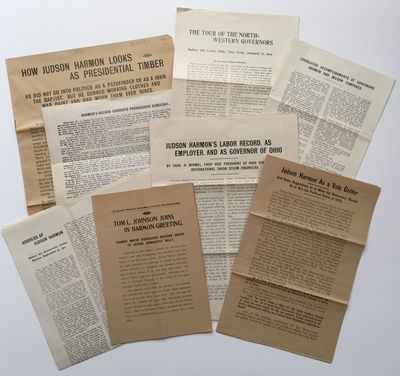 by [Harmon, Judson]. [Election of 1912]
[Columbus, Oh, 1912. About very good.. Eight pieces, including one 12pp. pamphlet and seven broadsides and bifolia. Old folds, light wear. Several items evenly tanned. An informative group of eight extremely scarce or unrecorded pieces promoting the presidential campaign of Ohio Governor, and former U.S. Attorney General, Judson Harmon in 1912. Harmon eventually lost out to Woodrow Wilson at the Democratic National Convention. The most substantial piece, a twelve-page pamphlet concerning Harmon's "presidential timber," located only at the Ohio History Center, lavishes praise upon his character and provides a lengthy discussion and defense of his legislative record as Governor. The remaining pieces are not recorded by OCLC, and include an endorsement from the late mayor of Cleveland, Tom L. Johnson, a broadside comparing Harmon's record with Wilson's, a four-page endorsement by Charles H. Wirmel, leader of the Ohio Steam Engineers Union, a broadside printing of endorsements from Progressive leaders in the Democratic Party, and two printings of remarks made by Harmon before Democratic Party gatherings. Scarce and ephemeral material on the Democratic contest for the presidential nomination in 1912. (Inventory #: 371)
$450.00 add to cart Available from
McBride Rare Books
Share this item

This Pocket Map of Wyoming Is Useful for Reference [cover title]

Denver : Singer Manufacturing Co , 1911
(click for more details about This Pocket Map of Wyoming Is Useful for Reference [cover title])

[San Francisco] : Pacific Telephone and Telegraph Co , 1907
(click for more details about Oakland, Alameda, and Berkeley Telephone Directory)
View all from this seller>