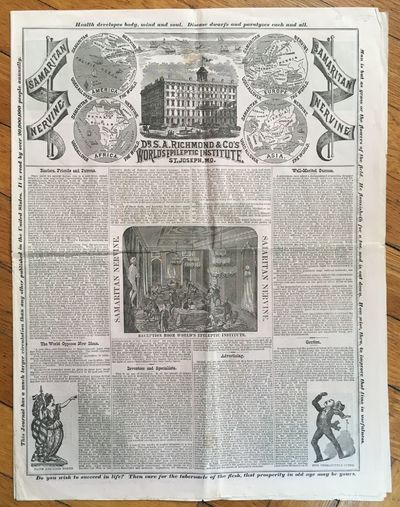 by [Missouri]. [Patent Medicine]
St. Joseph, Mo, 1882. Very good.. 8pp. Newspaper folio. Previously folded. Very minor loss at intersection of folds, slightly affecting text. Minor wear at edges. Unopened at top edge. A wonderfully illustrated and rare newspaper promotional for S.A. Richmond & Co.'s patent medicine, Samaritan Nervine. Samuel Richmond came to St. Joseph, Missouri, in the late 1870s, and established this "World Epileptic Institute," mostly to sell his elixir, which was in fact diluted nightshade. His elaborate advertisements, of which this is an example, claimed that it not only cured cases of epilepsy, but also treated ill-behaved children and sexually dysfunctional elderly men, and soothed many other maladies of the nerves. Eventually, he was attacked in print by a local newspaper, at which point he promptly shot the editor, and after being found not guilty by reason of insanity, removed to Tuscola, Illinois, where he continued to produce the potion. This newsprint advertisement provides a vigorous defense of Richmond's product, supported by numerous lengthy testimonials. Several illustrations also depict the grounds and offices of his epilepsy institute, including, strangely, though perhaps not surprisingly, the press room. OCLC locates only copy, at the University of Rochester. (Inventory #: 293)
$750.00 add to cart Available from
McBride Rare Books
Share this item