Victory: Decision of the United States Supreme Court in the Case of Angelo Herndon, April 1937. Full text of the majority decision setting aside the verdict in the Herndon case, by Justice Roberts; with the dissenting opinion of the minority, by Justice Van Devanter. With an Introduction by Anna Damon 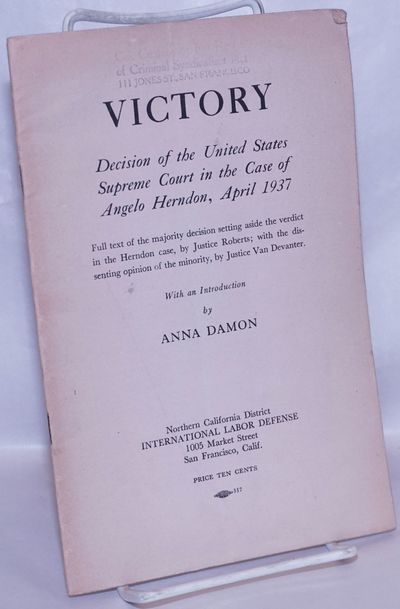 by Damon, Anna, introduction
San Francisco: Northern California District, International Labor Defense, 1937. Pamphlet. 30p., stapled wraps, 5.5x8.5 inches, staplebound pamphlet, lightly toned, vertically creased, staples rusted, ink stamp on front wrap else good condition. Herndon served four years of an 18-to-20 year sentence for interracial organizing in Georgia, having been convicted of insurrection. He was briefly released, but had to return to prison in 1936. After his ultimate release in 1937, and the Supreme Court's overturning of his case, he continued his activism with the Communist Party and worked on numerous local cases involving discrimination. (Inventory #: 234109)
$75.00 add to cart or Buy Direct from Bolerium Books
Share this item