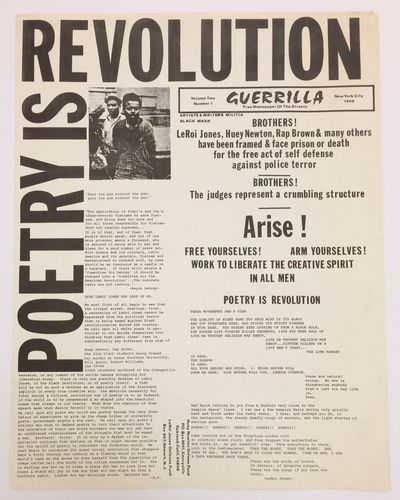 by LeRoi Jones, et al.
New York: Artists & Writers Militia; Black Mask, 1968. 16 x 22.25 inches, not folded; some wear to one corner point, otherwise a bright and clean example. "Brothers! LeRoi Jones, Huey Newton, Rap Brown & Many Others Have Been Framed & Face Prison Or Death For The Free Act Of Self Defense Against Police Terror." Includes a poem by Jones (Amiri Baraka). Guerrilla was published by Allen Van Newkirk from 1967-1968. Van Newkirk, who was connected with the White Panthers, styled his paper after Black Panther publications, and called Guerrilla "a broadside of poetry and revolution." He was known for his anarchic behavior. During a New York City poetry reading by Kenneth Koch, Van Newkirk charged the stage firing a pistol (loaded with blanks) declaring "death to bourgeois poets" while others threw copies of the Guerrilla to the stunned (and fleeing) audience. According to Detroit's Metro Times, he was arrested in a December 2005 robbery in a Toy's R Us near Vancouver, British Columbia. John Sinclair, originally an editor of Guerrilla, remarked, "The surrealists were his big inspiration, and if sticking up Toys "R" Us isn't a surreal act, I don't know what is! (Inventory #: 234118)
$400.00 add to cart or Buy Direct from Bolerium Books
Share this item

All books subject to prior sale Major Institutions can be billed. ALL BOOKS ARE IN VERY GOOD CONDITION OR BETTER UNLESS NOTED. All books returnable for any reason within thirty days of receipt.
More from this seller
View all from this seller>