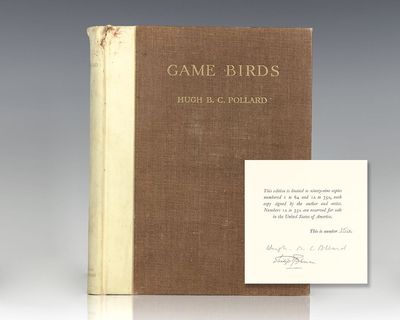 by Pollard, Hugh B.C. Illustrated by Philip Rickman
London: Eyre and Spottiswoode, 1929. Scarce first signed limited edition of Pollard's definitive work on game birds with Rickman's exquisite plates. Quarto, original quarter vellum spine over the original brown cloth with gilt titles, top edge gilt with others uncut, with 14 color mounted plates by Philip Rickman with lettered tissue guards including the frontispiece of varieties of pheasant. One of only ninety-nine copies numbered 1 to 64 and 1A to 35A, each copy signed by both the author and illustrator with number 1A to 35A reserved for sale in the United Stated. This is number 15A. In very good condition with wear to the crown of the spine and the plates in exceptional condition. Scarce and highly desirable. British author, firearms expert, and intelligence officer Hugh Bertie Campbell Pollard published several works on weaponry, in particular the usage of sporting firearms. Pollard collaborated with British painter Philip Rickman in the present volume, who gained notoriety in 1920 with his first landscape painting exhibition at the Greatorex Gallery in Bond Street, London. Influenced by George Edward Lodge, Rickman's ornithological paintings are revered for their mastery in conveying the complex iridescence found in the plumage of birds such as pheasants, kingfishers, and other waterfowl. (Inventory #: 95089)
$325.00 add to cart or Buy Direct from
Raptis Rare Books
Share this item