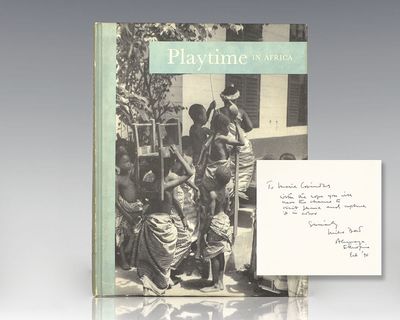 by Sutherland, Efua. Photographs by Willis E. Bell
London: Brown Knight & Truscott Ltd. First British edition of Sutherland and Bell's classic children's photobook. Octavo, original pictorial boards, illustrated. From the library of American photographer Marie Cosindas with a gift inscription to her on the front free endpaper. Marie Considas became best known for her evocative still life and color portraits. She was one of the first photographers to incorporate color photography into her work, which distinguished her from other photographers in the 1960s and 1970s. In 1962, Ansel Adams recommended Cosindas to Polaroid for their artist trial of their new instant-developing color film. She was the fifth woman to have a show at the Museum of Modern Art in New York in 1966. In near fine condition. Ghanian playwright, dramatist, children's author, and cultural activist Efua Sutherland was an extraordinarily influential figure in the development of modern Ghanaian theatre, and helped to introduce the study of African performance traditions at the university level. She was a cultural advocate for children from the early 1950s until her death, and played a role in developing educational literature, theatre and film for and about Ghanaian children. Her 1960 photo essay Playtime in Africa, co-authored with Willis E. Bell, highlighted the centrality of play in children's development and was followed in the 1980s by her leadership in the development of a model public children's parks system for the country. (Inventory #: 95105)
$150.00 add to cart or Buy Direct from
Raptis Rare Books
Share this item