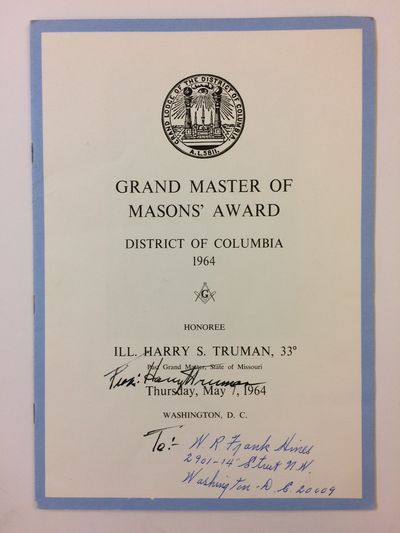 by TRUMAN, Harry S. (1884-1972)
Washington, 1964. unbound. very good. Signed Masonic program: Grand Master of Mason's Award, District of Columbia, 1964, Honoring Illustrious Harry S. Truman, 33 Degree, Past Grand Master, State of Missouri, Thursday May 7th 1964, Washington, D.C. 7" x 10", 8 pages, approximately 300 printed to accommodate seated guests, whereby the former President received his honorarium and reciprocated by donating: "A Stone removed from the Foundations of the White House during the renovation of 1950, bearing the Masonic "signature" of an unknown Master Mason, Forever Linking his Preferment in Freemasonry with the construction of the first "Home of the Presidents", nearly one hundred and sixty years ago." Truman has signed the cover directly below his name and Masonic Degree. At the bottom of the page he adds the word "To:" followed by the name and address of fellow Mason who he has bequeathed this program as a gift. Excellent condition. United States Senator from Missouri who became the thirty-third President of the United States upon the death of Franklin Delano Roosevelt. (Inventory #: 289007)
$400.00 add to cart or Buy Direct from
Argosy Book Store
Share this item

Philadelphia : Thomas Dobson & Co , 1818
(click for more details about Southern Hemisphere)
View all from this seller>