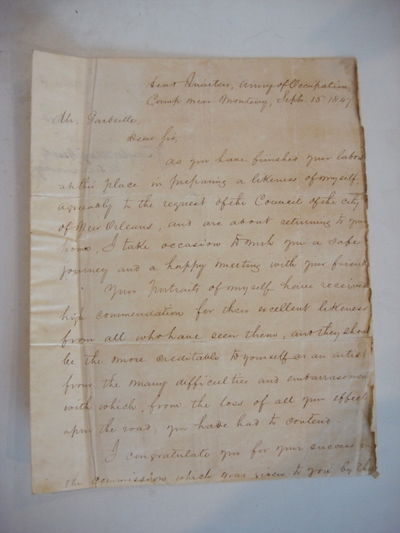 by Taylor, Zachary
Monterrey, Mexico, 1847. Very good. 1-1/2 page LS by Zachary Taylor, as "Major General, U. S. Army, Sept 15, 1847, at Headquarters, Army of Occupation, Camp near Monterrey," addressed to "Mr. Garbeille" (Philippe Garbeille, French artist living and working in New Orleans from 1842 until his death in 1853). Taylor cites how pleased he is with the completion of the sculptured bust of Taylor commissioned by the Council of the Arts of New Orleans. It is an, "excellent likeness," and that the artist has had, "many difficulties and embarrassment with which, from the loss of all your effects upon the road, you have had to contend." In fact, Garbeille was accosted by a party of Mexican Rancheros on his way to Taylor's encampment in the field, who robbed him of his possessions even taking the plaster he had brought with him to execute the sculpture bust. Luckily two of Gen. Taylor's assistants were able to discover a kind of local stone good enough to make some new plaster. Garbeille was allowed 4 sittings with the General in his tent headquarters. Right hand edge of letter a bit dog eared and the folded sheet has a crease towards the inner margin. This letter was written 7 months after the decisive battle of Buena Vista, close to Monterrey, and 5 months before the end of the war with Mexico (Feb. 2, 1848) with the Treaty of Guadalupe Hidalgo. (Inventory #: 9574)
$3,750.00 add to cart Available from
Kenneth Karmiole
Share this item
Kenneth Karmiole Bookseller, Inc.
Offered by

Remittance with order; libraries and institutions will be billed. Postage and insurance additional. California residents please add sales tax. If not satisfied, books are returnable within 10 days for a full refund.
More from this seller

A CRITIQUE AND NOTES UPON THE PARADISE LOST. FROM THE SPECTATOR

London : A. Millard and R. Dorsley , 1765
(click for more details about A CRITIQUE AND NOTES UPON THE PARADISE LOST. FROM THE SPECTATOR)
View all from this seller>