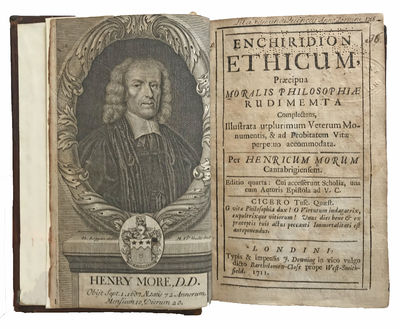 by MORE, Henry (1614-1687).
London:: J. Downing, 1711., 1711. 8vo. A-B8, C5, *4, C6-8, 2E8, 2F4. Pagination: xlii, [8], 318, 86, [2 ads] pp. Engraved portrait of More by van der Grucht after Loggan; frontis. trimmed. Contemporary blind-tooled calf, rebacked, four raised bands, gilt title, new endleaves. Signature of Edmund Quincey 1718 on title, donor’s note [to Jeremiah Dummer, armigir [Silversmith]] dated 1718 on f.f.e.p.; along with signatures of "William B. Calhoun" one dated 1810 (possibly US congressman from Mass.) 1796-1865; foxing, some leaves toned, marginal pen lines. Title + first leaf perforated and embossed. Very good. COPY INSCRIBED TO A PIONEERING SILVERSMITH IN MASSACHUSETTS, A CONTEMPORARY OF PAUL REVERE. Fourth edition. Henry More (1614-1687), philosopher, poet, and theologian. "More was in his day regarded as one of the leading philosophers of his time. He was the most prolific of the group of philosophical divines known now as the Cambridge Platonists. He was also a theologian of tolerant stamp who was regarded as a founder of the broad-church movement nicknamed latitudinarianism. His religious convictions were formed in reaction to the strict Calvinism of his upbringing. In the autobiographical preface to his Opera omnia he records his horror when still a boy at school at the Calvinist doctrine of predestination. His philosophical preference for Platonism was formed later, after a period of intense study while still an undergraduate, which nearly resulted in a sceptical crisis. In 1662 More published a collected edition of his philosophical writings, A Collection of Several Philosophical Writings, which included appendices and scholia on the constituent works where he develops and defends his ideas, as well as Epistola H. Mori ad V. C., which contains a more cautious appraisal of Descartes. In 1664 he was elected fellow of the Royal Society. Shortly afterwards he published two works aimed at a more popular audience: his manual of ethics, Enchiridion ethicum (1667), and Divine Dialogues (1668)." Hermann Frederick Clarke, Henry Wilder Foote, Jeremiah Dummer, colonial craftsman & merchant: 1645-1718, 1935. Jeremiah Dummer (1645-1718), a contemporary of Paul Revere, learned his silversmith trade from John Hull, having been bound to him in 1659 as an apprentice for a term of eight years. Drummer also became an important personage in the colony, serving as officer in the military, as selectman, justice of the peace, treasurer of the county, judge of one of the inferior courts, and as one of the Council of Safety in 1689. . ." – The Burlington Magazine - Volume 9 - page 421, 1906. Drummer was also an engraver and in 1710 he printed the first money in Connecticut. Increase Mather dedicated a work written in 1718 to him, noting his position and achievement in the Massachusetts colony. Note: Judith Hull was the daughter of Edmund Quincey (this book was inscribed to him), the late wife of John Hull (the man Drummer apprenticed under). Full title: Enchiridion Ethicum, Praecipua Moralis Rhilosophiae Rudimenta Complectens, Illustrata utplurimum Veterum Monumentis, & ad Probitatem Vitae perpetuo accommodata. Editio quarta: Cui accesserunt Scholia, una cum Autoris Epistola ad V.C. (Inventory #: LVV2032)
$195.00 add to cart Available from
Jeff Weber Rare Books
Share this item

Algebraic Number Fields (L-functions and Galois properties). Proceedings of a symposium organised by the London Mathematical Society with the support of the Science Research Council and the Royal Society.

London & New York: : Academic Press, 1977. , 1977
(click for more details about Algebraic Number Fields (L-functions and Galois properties). Proceedings of a symposium organised by the London Mathematical Society with the support of the Science Research Council and the Royal Society.)

Methods of representation theory with applications to finite groups and orders.

New York: : John Wiley & Sons, 1981, 1987. , 1981
(click for more details about Methods of representation theory with applications to finite groups and orders.)
View all from this seller>