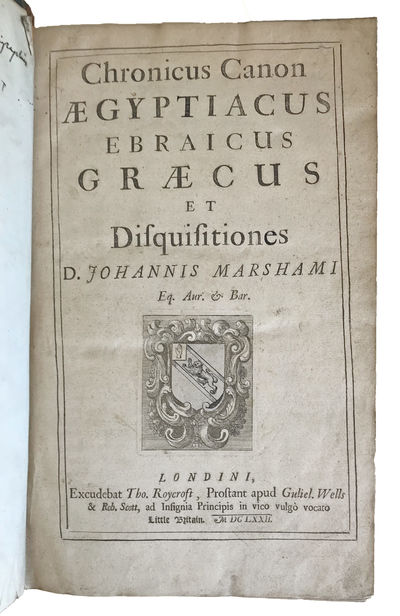 "A learned work, which was written to influence the belief that all the Jewish rights were of Jewish origin. Witsius in his Aegyptiaca controverts this opinion" (Jones & Anderson Galleries, p. 48).

The DNB: "Years of private study at Cuxton had already borne fruit in Marsham's Diatriba chronologica, a treatise on the dating of the Old Testament, published in London in 1649. About 1665 he brought out a much longer work, incorporating most of the Diatriba, entitled Chronicus canon Aegyptiacus, Ebraicus, Graecus et disquisitiones, dealing with the dating of ancient history. A note in a surviving copy states that 500 copies of this edition were destroyed in September 1666 in the fire of London, in which Sir John's library also suffered. Marsham profited by this setback to enlarge his work. An expanded edition of the Chronicus canon came out in 1672. The 1672 version subsequently appeared in two foreign editions, one at Leipzig in 1676 and the other at Franeker, in Friesland, Netherlands, in 1696". [DNB]. Marsham "was an English antiquary known as a writer on chronology. He was also a chancery clerk and politician who sat in the House of Commons from 1660 to 1661" (Wikip.). REFERENCES: ESTC, R217813; Wing M-810a. See: Donald R. Kelley, David Harris Sacks (eds.). The Historical Imagination in Early Modern Britain: History, Rhetoric, and Fiction, 1500-1800, (1997), p. 23; Jones, Herschel Vespasian & Anderson Galleries, Catalogue of the Library of Herschel V. Jones, New York: Anderson Galleries, 1918; Guy G. Stroumsa, A New Science: The Discovery of Religion in the Age of Reason, (2010), pp. 52, 82. WorldCat: 4 copies. (Inventory #: LLV2645)
$500.00 add to cart Available from
Jeff Weber Rare Books
Share this item