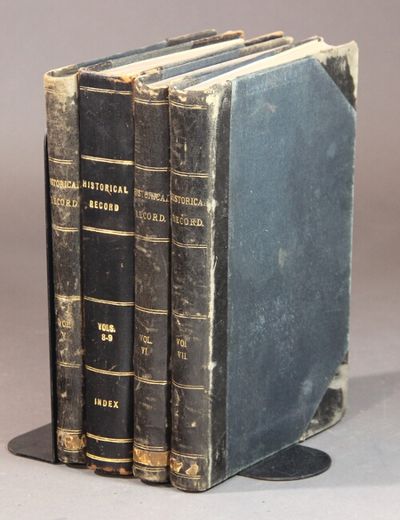 by Jenson, Andrew (editor)
Salt Lake City: Andrew Jenson, 1890. 5 volumes in 4, 8vo, uniformly rebound in half gilt-ruled leather over pebbled cloth boards; mild edgewear, very good. A publication on Mormon history and current events, with topics on Joseph Smith, local news, mission reports, church chronology, etc., accompanied by indices. The previous four volumes had been published under the title Morgenstjernen in Danish and were never translated into English. The series concluded with vol. 9. The English title volumes were later republished under the title The Mormon Encyclopedia. Flake, 4402. (Inventory #: 53436)
$460.00 add to cart or Buy Direct from
rulon-miller books
Share this item

A book of some alphabets conceived and printed by the Junior Class of calligraphy in the Graphic Design Program, Department of Art at the University of Illinois

Urbana, Illinois 1966
(click for more details about A book of some alphabets conceived and printed by the Junior Class of calligraphy in the Graphic Design Program, Department of Art at the University of Illinois)

Muscatine, Iowa : The Prairie Press , 1937
(click for more details about Sincerely yours. Poems)
View all from this seller>