The Games of the Xth Olympiad "Los Angeles 1932" Official report 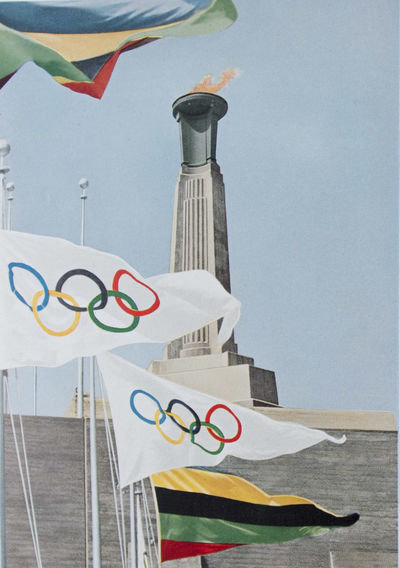 by The Xth Olympiad Committee
Los Angeles: Published by the Xth Olympiad Committee, 1933. First edition. Hardcover. g+ to vg. Folio. 814, [2]pp. Original illustrated black and white-stamped orange cloth with black lettering on spine and front cover. Color frontispiece. Exhaustive and extensively illustrated official report of the 1932 Olympic games. The 1932 Summer Olympics, officially known as the Games of the Xth Olympiad, was a major world wide multi-athletic event which was celebrated in Los Angeles. No other cities made a bid to host these Olympics. Held during the worldwide Great Depression, many nations and athletes were unable to pay for the trip to Los Angeles. Fewer than half the participants of the 1928 Summer Olympics in Amsterdam returned to compete in 1932. Even U.S. President Herbert Hoover skipped the event. Despite this, the standard of competition was excellent. The Coliseum Olympic stadium astonished the whole world. Its scale and quality were beyond anything that had come before, creating the first Games we would recognise today. The crowds were also without precedent, starting with the 100,000 people who attended the Opening Ceremony. Between 1900 and 1928, no Summer Games had been shorter than 79 days, but in Los Angeles this was cut to just 16. It has remained between 15 and 18 days ever since. Other firsts included the male athletes being housed in a single Olympic Village (the women stayed in a luxury hotel), and medal winners standing on a podium with the flag of the winner being raised. The spirit of the Olympic Games was exemplified by British fencer Judy Guinness. Contesting the final, she gallantly gave up her hopes for a gold medal when she pointed out to officials that they had not noticed two touches scored against her by her final opponent, Ellen Preis of Austria.The organizing committee put no record of the finances of the Games in their report, though contemporary newspapers reported that the Games had made a profit of US $1,000,000. This official report is profusely illustrated throughout with hundreds of b/w photographic reproductions and numerous full-page photogravures and color plates. Light shelf wear along edges of binding with small bump at middle of bottom front cover. Small water stain at top right edge starting at page 550 through end of block. Binding in overall good+, interior in very good condition. (Inventory #: 45074)
$500.00 add to cart or Buy Direct from
Eric Chaim Kline Bookseller
Share this item