Charter of "The American Institute of the City of New York." Incorporated May 2, 1829 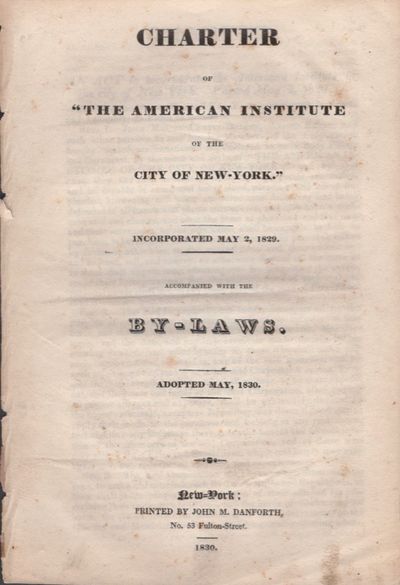 by [American Institute of the City of New York]
New York: Printed by John M. Danforth, 1830. Wraps. Very good. Disbound wraps. Approx. 7.5" x 5". 6 pages. Light toning. The first President of the Institute was John Mason. The Institute was incorporated for the purpose of encouraging and promoting domestic industry in agriculture, commerce, manufacturers and the arts (from New York: Past, Present, and Future). From wikipedia:

John Mason (c. 1773 - September 26, 1839) was an early American businessperson, merchant and banker. Mason served as the second president of Chemical Bank from 1831 through 1839 and would later be referred to as "the father of the Chemical Bank". Mason was a founder of the New York and Harlem Railroad, one of the first railroads in the United States in 1831 and served as the company's second president. Mason who made much of his fortune in dry goods[1] was among the wealthiest landowners in New York City in the early 19th century.[2] He purchased a large portion of what is today Midtown Manhattan in 1825 including much of the land bounded by Fifth Avenue and Park Avenue between 53rd Street and 64th Street.[3]. (Inventory #: 16158)
$100.00 add to cart or Buy Direct from Americana Books
Share this item

by Hugo, Victor; Dole, Helen B. (translated from the French)

Chickamauga Bloody Battle in the West

Indianapolis : Bobbs-Merrill , 1961
(click for more details about Chickamauga Bloody Battle in the West)
View all from this seller>