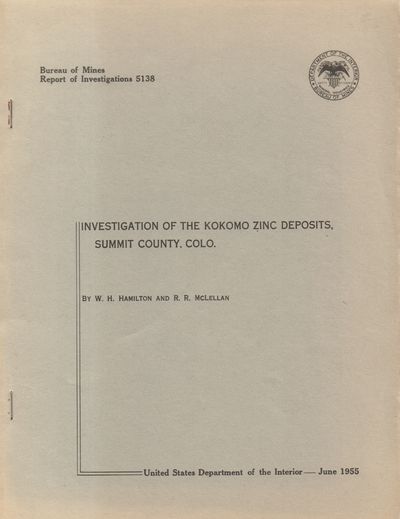 by Hamilton, W. H. & R. R. McLellan
Very Good. 1955. First Edition. Stapled wraps. Grey staple bound wraps are in very good condition. Fading to edges, bumped corners. Introduction to the work begins with, "The Kokomo (Tenmile) mining district has had an output value between $20 and $30 million, mostly from production of silver, lead, and zinc, since 1878. For many years before World War II, there was little production as the complex nature of the ores made them unattractive at existing metal prices. Under the stimulus of the war, the Geological Survey and the Bureau of Mines studied the district, and in October 1944 the Bureau of Mines began an explorations project, which included diamond drilling, bulldozer trenching, and geophysical surveying. Project work was continued until March 1949, except for short recesses during 1945, 1947, and 1948." ; 4to 11" - 13" tall; 28 pp . (Inventory #: 018277)
$21.00 add to cart Available from
Back of Beyond Books
Share this item

Museum of New Mexico , 1973
(click for more details about Photographers of the New Mexico Territory, 1854-1912)
View all from this seller>