TONY HILLERMAN: From the Blessing Way to Talking God. A Bibliography #18/20 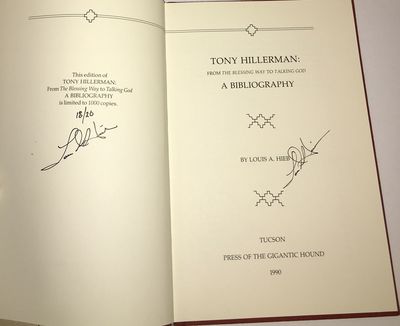 by Hieb, Louis A.
Tucson: Press of the Gigantic Hound, 1990. First edition. Hardcover. A fine copy, issued without dust jacket. Small 4to. This copy is one of only 20, being #18. The same brick rust colored cloth as the one of 1000 copies, but this copy, on the limitation page, states #18/20 and is signed by Hieb there, as well as the opposite title page. 88pp, being the first bibliography on the writings of Anthony Grove "Tony" Hillerman, 1925-2008, an American author of detective novels and non-fiction works best known for his Navajo Tribal Police mystery novels. Several of his works have been adapted as theatrical and television movies. Hillerman won the Edgar Award for Best Novel in 1974 for his book 'Dance Hall of the Dead'. In 1987 he won the Grand Prix de Litterature Policiere International, also for 'Dance Hall of the Dead', as well as the Spur Award for his Western Novel, 'Skinwalkers', In 1988 he won the Anthony Award for Best Novel, for 'Skinwalkers'. In 1989 he won the Macavity Awards for Best Mystery Novel, for 'Thief of Time'. In 1990 he won the New Mexico Governor's Award for Excellence, in 1991 he won the Nero Award for his book 'Coyote Waits', also in 1991 he won the Edgar Grand Master Award. In 1992 he won the Macavity Awards for Best Critical/Biography for his book, 'Talking Mysteries', in 1995 he won the Anthony Award for Best Anthology/Short Stories for his book, The Mysterious West, in 2001 he won the Agatha Award for Best Non-Fiction for 'Seldom Disappointed', in 2002 he won two more awards, the Anthony Award for Best Critical/Nonfiction for his book 'Seldom Disappointed, and also he won the Malice Domestic Award for Lifetime Achievement, and finally, in 2007, He won the Spur Award for Best Western Short Novel for 'The Shape Shifter'. (Inventory #: 14081)
$50.00 add to cart or Buy Direct from Ed Smith Books
Share this item

CELEBRATE THE 20th ANNIVERSARY OF THE SUMMER OF LOVE. An A/P signed by the Big 5; Victor Moscoso, Rick Griffin, Alton Kelley, Wes Wilson, and Stanley Mouse


(click for more details about CELEBRATE THE 20th ANNIVERSARY OF THE SUMMER OF LOVE. An A/P signed by the Big 5; Victor Moscoso, Rick Griffin, Alton Kelley, Wes Wilson, and Stanley Mouse)

1987
(click for more details about ARTIST RIGHTS TODAY. An A/P Signed by the "BIG 5", Victor Moscoso, Rick Griffin, Alton Kelley, Wes Wilson, and Stanley Mouse. 1987)
View all from this seller>